Now on sale as both a paperback and e-book: http://booklocker.com/books/6965.html Also available from Amazon and other online book sellers.

Roger and Me. March of the Penguins. Man on Wire. Paradise Lost. Grizzly Man. Gates of Heaven. Taxi to the Dark Side. Super-Size Me. Spellbound.

In recent decades, titles like this have raised the profile of documentaries like never before. The appeal of films that rely on the testimony of real life have increased in the age of the “indie” and attracted a growing numbers of viewers looking for an alternative to a movie industry that too often seems fixated on the bottom line.

Documentary 101 is a first-of-its-kind anthology, covering the entire spectrum of non-fiction film with entries on over three hundred titles from the years 1895 to 2012. There are 101 full-length reviews of documentaries chosen for their aesthetic prominence and/or historical significance, followed by briefer entries on related titles. There are 325 total reviews and an informational appendix in its 418 pages.

Over the next several weeks I will be excerpting the book, using film stills I purchased that were not included for reasons of cost and the eternal differing opinions on what constitutes fair use. 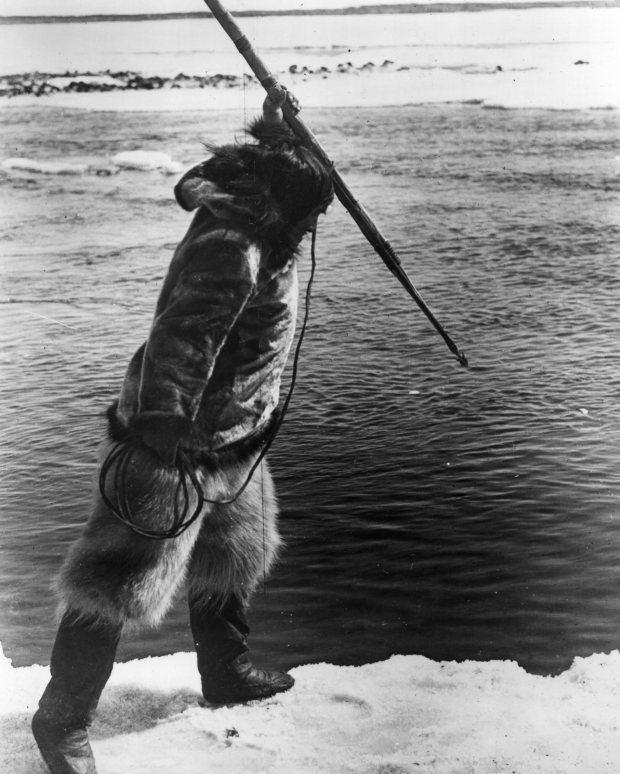 The man director Robert Flaherty named Nanook (“The Bear”) was a prominent hunter for the Inuit tribes in the landmass to the east of uppermost Hudson Bay. He fashioned a “family” for Nanook and brought along on expeditions a handful of men known to him. They were all enthusiastic about the idea of the movie, which they called the “aggie” (big picture). From the start of film, Flaherty’s sympathies are clear: free of civilized neuroses, these are “the most cheerful people in all the world”, and the keen focus on daily survival skills affords them an inspirational aura. The affection Nanook and his screen wife show to the children and the children’s affection towards their puppy shrinks the vast distance between the subject and viewers. But the survival “lifestyle” is rugged stuff and the bulk of “Nanook of the North” is made up of a series of memorable hunting scenes. The 300 members of this tribe scrape out a living on a frozen range the size of England. The specter of starvation is always close at hand and Flaherty does not forget the crucial nature of this struggle—he hardly could have because he was part of the same knife’s edge existence during his sixteen months of filming. (“Nanook of the North” 1922)

Humphrey Jennings’ tribute to (Britain’s) Auxiliary Fire Service was called “Fires Were Started” and may have seemed passive in comparison (to the war’s more pugnacious bugle-call films), despite now being the most critically lauded of his works. It is set up as a dramatic film, largely re-created by real brigade members since large-scale bombings had ceased in London by 1943. There is no mention of the Germans until the twenty-eight-minute mark, when the banshee wail of an air-raid siren pierces the night. The brigade is sent to tackle an inferno at a dock warehouse and keep it from spreading to munitions-carrying ships due to sail for the Continent.
(“London Can Take It” and other films by Humphrey Jennings, 1940-1951) 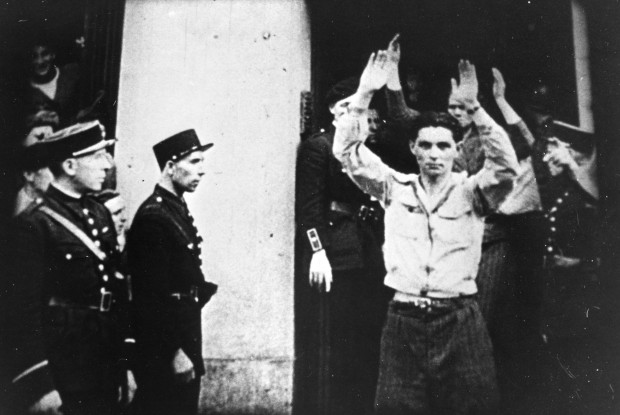 The popular legend that took hold in France after World War II, of a widespread resistance that fought Nazi occupation tooth-and-nail, comes under intense scrutiny in Marcel Ophuls’s epic work, one of the most critically acclaimed of all documentary films. Using the city of Clermont-Ferrand as a microcosm of the whole nation, Ophuls bravely makes the case that the forces of collaboration were much stronger and reduced France to a long-term accommodation with one of the most deplored regimes in history. “The Sorrow and the Pity” certainly struck a raw nerve with officialdom at the time of its release. It was banned from French TV for ten years.
(“The Sorrow and the Pity” 1971)

In the early minutes of the film there are some readymade Michael Moore moments like the well-known scene where he opens a savings account at a Midwest bank in order to receive the free shotgun that apparently has replaced the complimentary toaster of days gone by. But “Bowling for Columbine” works best when Moore is seen on camera talking matter-of-factly to a wide variety of Americans and trying to come to terms with the country’s high level of gun violence. This is not the easiest issue to suss out, especially when the murder rates of other industrialized countries barely rate as a fraction when compared to the United States. During a side trip into Canada, Moore finds that there are seven million guns in about ten million households nationwide, yet the folks there would barely know what a homicide looks like.
(“Bowling for Columbine” 2002)

In 1983 Life magazine hired acclaimed photojournalist Mary Ellen Mark to do a story on the growing problem of teenage runaways. Her central subject was Seattle’s skid row and within a year Mark returned there with her filmmaker husband, Martin Bell, to make this equally sympathetic and non-judgmental film. These kids, most in their early teens, eke out a living via panhandling, prostitution and dumpster diving, forming a makeshift society on the fringes of the “respectable” world.
(“Streetwise” 1985)