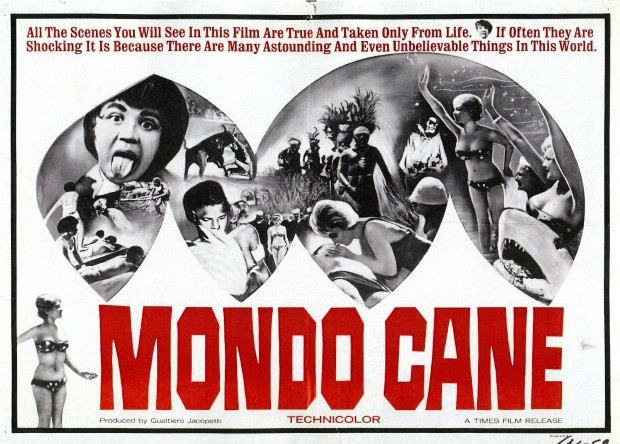 For better and worse, there is little that you can’t see nowadays online or on the hundreds of cable outlets that provide us with a ceaseless tsunami of content. But back in the pre-Interweb days of 1962, when content on the handful of TV stations available was tightly controlled, a spicy but nominally respectable documentary like “Mondo Cane” (A Dog’s World”) could become a big hit. Which it did. Using a deft combination of National Geographic nudity, remedial anthropology and bargain-basement shock tactics, this Italian production did boffo box office in many countries, including the U.S. and Canada, and spawned not only a sequel but a whole genre of sensationalist pseudo-docs called “mondo films.”

Sex and mortality are two recurring themes and the fact that many scenes seem staged or too subjectively edited to pass as real reportage didn’t seem to matter much back then, and probably wouldn’t scare away many pop culture connoisseurs today. Without much rhyme or reason, but with a certain devilish flair, “Mondo Cane” flits from topless manhunting in New Guinea, to dogmeat restaurants in Taipei, to drunken follies in Hamburg’s Reeperbahn, to naval port temptresses, to cargo cults and various victimized animals without pausing to catch its breath or consult its ethical bearings.

Each segment is approached with a consistent combination of index-card research and casual titillation (with special emphasis on the first syllable of that last word). Even when the subject matter is less than enthralling, the producers work up a little a little purple prose for good measure as with this quip to go along with some footage of a Pasadena pet cemetery—“This place is so pathetic even we could shed a tear for these little tombs of illustrious creatures.” Ouch!
For me, “Mondo Cane’s” undeniable value as a cult classic curiosity was undercut by the constant snarky narration and Lawrence Welk-style soundtrack. But even if this doesn’t sound like your cup of tea, at least get the two and a half minute re-cap as seen below in the film’s inimitable trailer.

My book “Documentary 101” is now on sale as both a paperback and e-book: http://booklocker.com/books/6965.html Also available from Amazon and other online book sellers.