Dormant for over ten years after a great run in the 1990s and early 2000s, the Boston Rock Opera company is back in a big way. In August they returned from a long hiatus with a three-part David Bowie tribute show at the ONCE ballroom in Somervile, Mass. and this weekend they are back at the same venue with a full theatrical production. Arriving in the middle of the excruciating endurance contest that is this year’s American presidential election season, the BRO’s upcoming rendition of the evergreen hippie musical “Hair” couldn’t have come at a better time. Even if the play’s zealous love-bead idealism is a little dated at this point (it was first produced almost 50 years ago) the book’s more particular message—a righteous plea for understanding, non-violence and harmony free of racial or gender bias—is more relevant than ever.

Right from the opening song, with its dreamy astrological pronouncement of a coming utopian age, “Hair” was a whole new ball of wax when it graduated from its off-Broadway beginnings to the Great White Way in 1968. In practical terms, it’s pretty clear that we haven’t reached the “Age of Aquarius.” It doesn’t look like “Peace will guide the planets” anytime soon and that instead of “No more falsehoods and derisions” there are many people more ready to dish them out than ever before. Boston Rock Opera founder (and “Hair” director) Eleanor Ramsay says the musical “Mirrors many of the same racial and social issues that dominate our discourse today.” All the more reason to bask in the exuberance and irreverence of a work that speaks to our better angels in an age when others try to cynically exploit our fears and prejudices. 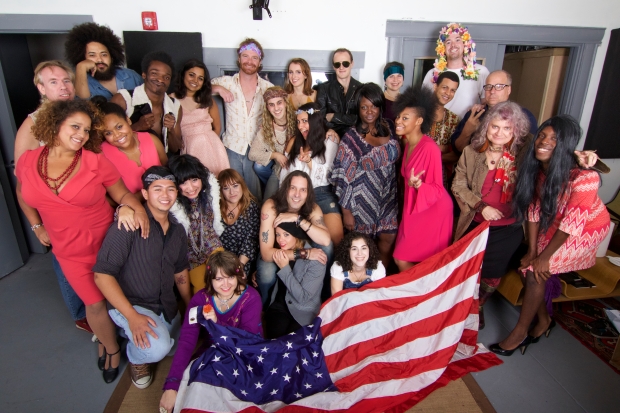 The cast of BRO’s production of “Hair.” Photo by Joshua Pickering

The Boston Rock Opera story began in the early Nineties, after an ad hoc performance of “Jesus Christ Superstar” on Easter weekend at the Middle East nightclub in Cambridge grew into something more. For the next decade, the group amassed a pretty impressive list of conceptual rock productions. There were encore performances of “Superstar” that got ever more professional, culminating in a version that had Gary Cherone, vocalist of Extreme, in the lead role. They also did a full staging of the Pretty Things’ “SF Sorrow,” arguably the very first rock opera, as well as Harry Nilsson’s “The Point” and the Small Faces’ “Happiness Stan.” There were original productions such as Tim Robert’s “Crackpot Notion” and album tribute nights: a particular favorite of mine was “Aqualung vs. Billion Dollar Babies.”

Most impressively for me were BRO’s productions of the Kinks’ sprawling political parable “Preservation.” This Ray Davies creation, unfolding over three discs on two different albums (1973-74), tells the cautionary tale of a gangster-like real estate developer who gains power and lays waste to a once-peaceful land. I know, right? Under the guidance of Eleanor Ramsay and local rocker Mick Maldonado, also starring as the devilish Mr. Flash, “Preservation” grew from a free-wheeling club show at the Middle East to the theater at the Massachusetts College of Art. This fully-realized incarnation, which co-starred Letter to Cleo’s Kay Hanley as Flash’s top “floozy,” got the official stamp of approval from Ray Davies himself when the Kinks leader stopped by a rehearsal and offered some feedback.

Works like “Preservation” were rapturously received by the local music community, so it was naturally disappointing when the Boston Rock Opera went quiet soon after a Tenth Anniversary show in 2003. An outsider can only guess at the difficulties of keeping afloat a rock-theater collective in this age of tightened resources and shiny digital distractions. That’s why it has been such a welcome surprise that this valuable local music resource is back with us. Let the sunshine back in.