Ralph Bakshi, the iconoclastic animator/director who is still probably best known for the 1972 film “Fritz the Cat,” has certainly had a curious career. Born in 1938 to Jewish parents living in Haifa, Israel, his family emigrated to avoid World War II and Ralph grew up on the gritty Brooklyn streets of mid-century New York. A keen interest in illustration and cartooning developed at Manhattan’s School of Industrial Art (now the High School of Art and Design) lifted him above his self-admitted feckless teenage years, but the streetwise demeanor seemed to stick with him. After breaking into the business with the Terrytoons animation studio (creators of Deputy Dawg and Mighty Mouse), Bakshi worked for years to develop his own projects and when he did it met with instant success. “Fritz the Cat”, based on the R. Crumb’s racy comic strip, kickstarted the modern movement of adult animation, with a visual look of stylized realism and blatant themes of sex, violence and drug use that earned Fritz an X rating, which in turn only helped to boost the film’s profile. After that, though, Bakshi seemed content to coast on that initial hit, either re-treading the urban-jungle setting (Heavy Traffic) or indulging in the burgeoning animated fantasy genre (“Lord of the Rings” and “Wizards”). But with 1981’s “American Pop”, where he took on the far-reaching subject of American popular music, he created his biggest fantasy yet: that he knew anything about the topic he was making a movie of.

“Hey man, what is this shit? You’re pulling Houdini and she’s pulling freak-out city!” “American Pop’s” hapless hippie band get saddled with a lot of the film’s tin-eared dialogue.

During the film’s 96 gear-grinding minutes, Bakshi traces the history of this vast genre from mediocre vaudeville performers in the 1910s to a coked-up poseur doing a hatchet job with Heart’s “Crazy on You” to an arena crowd at the end of the Seventies. Authenticity leaks through only occasionally, and inadvertently. The director uses the potentially interesting idea of tracing this musical chronology through four generations of one family. However, hardly anyone in this clan seems to have much talent, having more success as hoodlums and dope pushers than they do as songsmiths. The patriarch starts out as a Russian emigrant kid in New York City who somehow transforms into a Sicilian gangster—he doesn’t have time to learn an instrument but does hang out in nightclubs. He marries a run-of-the mill chanteuse whose affection for home-delivered pretzels leads to tragedy (don’t ask). But this is not before they produce a son who is supposedly a “genius” but never seems to advance past the piano lounge in his daddy’s restaurant. He in turn has a son named Tony (still with me?) who, despite being a dim-witted layabout, somehow manages to compose the classic songs “A Hard Rain’s A-Gonna Fall” and “Don’t Think Twice, It’s Alright.” Maybe Bakshi figures that no one will care very much that Tony’s accidental inspiration in late-60s Haight-Ashbury comes several years after some guy named Bob Dylan wrote those songs in “real life.”

I’m sorry, pal, but could you move? We’re trying to shoot the “Physical Graffiti” album cover.

Actually, Tony is almost likable in his unwavering ineptitude. He chafes against the conformity of post-war suburban America and, dressed like James Dean and talking like Brando on sedatives, he goes cross-country, unfortunately impregnating a corn-pone Kansas girl along the way (this progeny turns out to be the “Crazy on You” guy). In a brief lyrical moment, Tony jumps a train and performs a harmonica duet with a black hobo, a rare nod that Bakshi makes to pop music’s great indebtedness to African-American culture. Later, Tony finds himself fed up with the latest in a long line of dishwashing jobs and tells his boss he’s going to keep “moving out West” before being reminded that he’s already in San Francisco. That this applehead is writing a masterpiece like “Hard Rain” only moments later is perverse proof that America is indeed the land of opportunity that his grandfather fled czarist Russia to find. 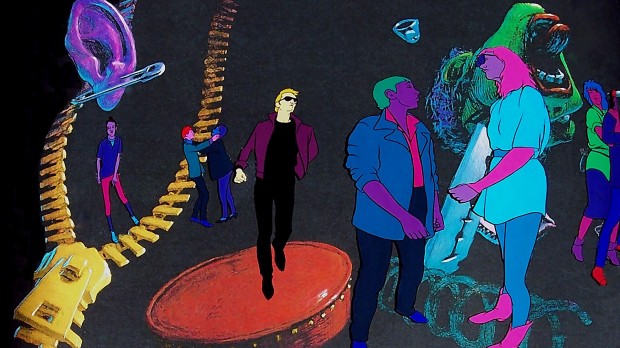 “American Pop” is based on such a lazy, checklist aesthetic that the only reason I can think of for its initial 1981 box-office success is a long-lingering “oh wow” factor left over from the Sixties. Just let it happen, man! Bakshi’s visual style still had a certain audience-drawing flair, though many elements (like the clunky “punk” montage see above) come across as third-hand information that should be laughable to any real rock fan. Pop history does matter so if you’re going to make a whole film about it, try to get within a mile or two of credibility. Instead, we’re asked to go along with the notion that Jimi Hendrix would open for the squabbling Frisco flunkies that are the movie’s excuse for a hippie band. (OK, Ralph, I heard you got a good price on the rights to use “Purple Haze” but really!). I get the feeling, though, that many of the true-blue fans I mentioned would have mentally checked out by then, long before “American Pop’s” absurdly anticlimactic, fist-raising concert finale. That would leave plenty of time to ponder just why Bakshi felt he needed to foist this clueless cartoon on the world.

My latest book, Rock Docs: A Fifty-Year Cinematic Journey, is available now in paperback from Amazon and other online retailers, including from my author page at BookLocker.com. Click on this link for a 30-page excerpt:
http://booklocker.com/books/8905.html