Bob Dylan’s Blonde on Blonde was rock’s first word on double studio albums and for many fans and critics it was the last word as well. There are those who would stand up for different personal favorites, many for the two-baggers released by the other figureheads in the holy trinity of the Sixties. Blonde on Blonde is not as willfully versatile as the Beatles’ “White Album” and it doesn’t rock out as hard as the Stones’ Exile on Main Street. But it does pre-figure the musical stretching-out of the former and nearly matches the grittiness of the latter. What it has over both of them of course are the lyrics. It s no surprise that Dylan, who had already fixed his place as the voice of a generation with socially-conscious anthems like “Blowin’ in the Wind” and “The Times They are A-Changin’,” would release an album that had his followers up into the wee hours trying to interpret every verbose stanza. But even in the wake of two seminal masterworks (Highway 61 Revisited and Bringing it all Back Home) this one stands out as a singular force of nature, the full flowering of his golden era. A severe motorcycle accident, an event whose details are still shrouded in mystery, sidelined Dylan only a few months after BOB’s release in May 1966. When he re-emerged a couple of years later it would be to resume a career that would run pretty much uninterrupted into the 21st century. But although there were to be some highlights to come, Dylan would never again conjure up the untamed genius that informs the music on these four sides.

Dylan was all about cutting against the grain of audience expectations back in those heady days, always one step ahead of the listeners who would claim him for their own. Blonde on Blonde’s off-focus cover photo shows the inscrutable artist wrapped tightly in a scarf and only half looking into the camera, defying you to know him. This was reinforced as soon as the needle was dropped onto side one. A sliding trombone note at the start of “Rainy Day Women #12 and 35” seems to pull you inside the doors of a Salvation Army mission where all notions of temperance have been cast aside: the brass band is three sheets to the wind and men are hootin’ and a-hollerin’ as the singer declares that “everybody must get stoned.” Although this refrain would prove popular with the burgeoning freak culture (and help propel the single to #2 on the Billboard charts despite some radio station bans) a closer listen reveals a stoning more in a literal or Biblical sense, and men can expect the brickbats being thrown by the fairer sex (or just straight society in general) to follow them all the way from the breakfast table to “when you’re sent down to your grave.” The inebriated refrain now suggests that for him and everyone else, to live and love is to hurt. A lot of the rest of the album hashes out this notion with the rarest of rock poetry and a willingness to further push the envelope musically. Dylan even channels Elmore James on the next track, “Pledging My Time.” This track sounds as if it were cut on the South Side of Chicago and not in Nashville where this recording mostly took place. The same goes for “Obviously Five Believers” and the saucy “Leopard Skin Pillbox Hat” where Dylan’s rare turn on lead guitar will leave listeners with both ears ringing.

These tracks would seem to give some literal basis for the oft-stated belief that this Minnesota-bred son of middle-class Jewish parents is one of the greatest of all white blues singers. But those are the fun tunes of BOB. The real hurting comes on Dylan’s more allusive, acoustic balladry: side one concludes with the masterful co-mingling of romantic and existential angst in “Visions of Johanna” and “One of Must Know (Sooner or Later).” The latter’s depiction of a confused, non-starter of a relationship, where Dylan stretches out the last note of each verse until it sounds like a lifetime of regret, is thought to be about his rumored affair with Warhol “It Girl” Edie Sedgwick. Other likely inspirations are his first wife Sara (they secretly married in late 1965), former paramour/vocal partner Joan Baez and maybe old girlfriend Suze Rotolo. Many Dylanologists have a soft spot for this particular parlor game. But the ageless reverie on love’s complications, and the pursuit of mysterious females whose attractions are both majestic and ephemeral, transcend biographical speculation. “Nobody feels any pain/tonight as I stand inside the rain,” is the famous opening couplet of the oft-covered “Just Like a Woman.” A young lady one moment described as Queen Mary is soon said to be “like all the rest/ with her fog, her amphetamines and her pearls.” This dude can’t abide in a free-fire zone between womanly wiles and girlish immaturity, only allowing on the way out that “I was hungry and it was your world.” “I Want You” was the second most successful of the LP’s four singles (#20 Billboard) and something of an anomaly in Dylan’s songbook. A sprightly pop number redolent of much mid-Sixties AM fare, its chorus is simplicity itself—the repetition of the title with “sooo baaad” tagged onto the end—though the verses are as cryptic as ever. 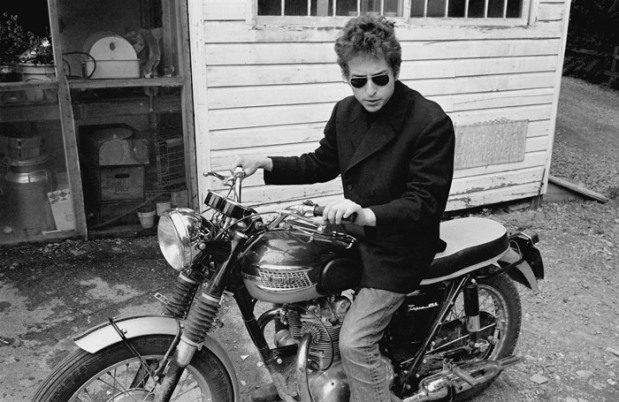 Capping off the romance-related material is the song most associated with the new Mrs. Dylan, “Sad Eyed Lady of the Lowlands” (Sara’s last name by her first marriage was Lownds). This is also the piece that inaugurated a feature of many double LPs to come: one song that would take up an entire album side. At just over eleven minutes, it’s only about half the length of many that would follow, but could hardly be less epic. A languorous, long-unspooling melody gives Dylan plenty of space to recount in head-spinning detail his intended’s many strange attributes: “your mercury mouth in the missionary times”, “your childhood flames on your midnight rug”, even “your sheet metal memory of Cannery Row.” Like several other songs on BOB, “Sad Eyed Lady” ends with a plaintive harmonica coda, as if giving us the opportunity to absorb the amazing rush of words that has just blown by. Yet for all the audacious application of language on the album (much of it said to have been written on the spot in a room off the studio), little of it is expended on the sort of topical song that much of Dylan’s considerable reputation had been built on. Some may have wished for more in this vein, if only for a break from the singer’s illiberal views on the opposite sex, as on “Just Like a Woman” and “4th Time Around”, the fraternal twin of the Beatles’ “Norwegian Wood.” 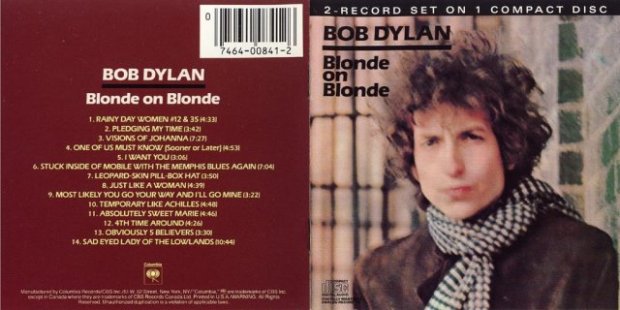 The closest we get to the old Protest Bob is on “Stuck Inside of Mobile With the Memphis Blues Again.” In no less than nine verses he runs a down a list of peculiar misadventures across a fabled American landscape, one that suggests the growing unease of a turbulent decade. There is the typical inventory of colorful Dylan characters: a gun-toting senator who enforces mandatory attendance at his son’s wedding, a preacher with “twenty pounds of headlines stapled to his chest”, cigarette-punching railroad men who “drink up your blood like wine” and Rosie, a woman of easy leisure who resides next to the “honky tonk lagoon.” After each bizarre encounter the narrator is left to question, “is this really the end” and trying to figure out “what you have to pay to get out of going through all these things twice,” a sentiment that could easily extend to the nation as a whole. “Memphis Blues Again” is also the best example of the album’s unusual musical symbiosis between Dylan’s regular hipster sidemen (Al Kooper, Robbie Robertson) and the cool precision of the Nashville studio players like multi-instrumentalist Charlie McCoy, versatile drummer Kenny Buttrey and guitarist Joe South, soon to become a notable singer-songwriter himself. With its intro resembling a freight train picking up speed and the dramatic series of hammered chords at the end, it’s little wonder that director Todd Haynes used this tune to play over the opening scene of his Dylan fantasia/biopic, I’m Not There.

Welcome to the Old Weird America. Todd Hayne’s brilliant opening sequence in “I’m Not There”

Haynes notably resorted to using six actors to portray his subject’s elusive persona and myriad career phases. Nothing is ever clear-cut with Dylan, including the release history of Blonde on Blonde. Although Columbia Records insists that they put out the record in May of ’66, it reportedly did not reach the charts (or have its review in major publications) until that July—-which could technically make the Mother of Invention’s Freak Out! rock’s first double studio album to hit the stores. Either way, Dylan’s popularity was peaking along with his skill set; Blonde on Blonde topped off at #9 in the U.S. and inspired a multitude down the path that led to a more independent–minded and ambitious style of youth music. A reluctant standard bearer in the first place, the June 29th motorcycle accident saw to it that Dylan would largely be on the sidelines for the revolutionary late 60s. Secluded in Woodstock (even, or especially, during a certain music festival) while raising a family and releasing a series of uneven albums, Dylan would not return fully to the public eye until his triumphant 1974 comeback tour with the Band. The BOB rocker “Most Likely You Go Your Way and I’ll Go Mine” served as a ferocious show-opening mission statement while “Rainy Day Women” proved a natural crowd pleaser and “Just Like a Woman” was an acoustic set highlight. His separation from, attempted reconciliation with, and eventual divorce from Sara served as raw material for many songs on subsequent albums, especially with Blood on the Tracks, his Seventies high water mark. It was a decade after this epoch-making double album that people saw the flip side of the inspiration that had served as a catalyst for some of pop music’s most memorable songwriting.

In this new series, I’ll take a in-depth look at a classic (or not so classic) double album every 10-14 days.
Next up: Husker Du’s “Zen Arcade”