My 2016 book Rock Docs: A Fifty-Year Cinematic Journey was ultimately conceived as a parallel history of pop music thru the prism of documentary film. Before I settled on that I had considered something of broader scope but decided the inclusion of rock-centric fictional feature films was too heavy a load. But that left me with a lot of unused notes, unused that is until now! Here is the first in a series of what I left behind.

“We live in a tawdry and vulgar age,” says an unscrupulous concert promoter looking to stage a charity concert in a Third World country, all to bolster the image of a heavy-handed regime. The planning of this televised benefit gig is the main premise of this loosely-plotted fantasia, directed by Larry Charles (Seinfeld, Borat) starring, and co-written by, Bob Dylan. Masked and Anonymous veers close to vanity project territory and was widely planned on its initial release in 2003. But its entrenched depiction of a dystopic place where the hopelessness of geo-politics meets the implied futility of idealism, is worth a good second look. If things were tawdry and vulgar back then, just look at us now. The absurdities of the Trump Age make it seem like this film was ahead of its time. 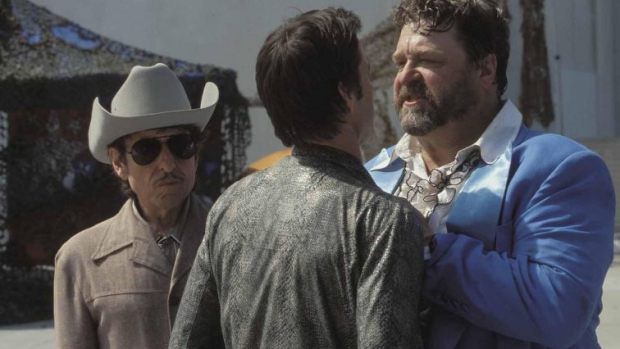 “What, another movie critic? I’ll take care of this one, Bob!”

After an opening montage dealing in images of global conflict and protest (set to a cover of Bob’s “My Back Pages” in French) we meet the shady promoter played by John Goodman working well within his wheelhouse. He has promised the ruling regime that he will deliver a star act for the benefit show. Hypocritically, the proceeds are meant for civilian victims of violence in the strife-torn nation. After getting the cold shoulder from the likes of U2, he goes to Plan B and gets living legend/has-been Jack Fate (Dylan) to agree to perform in return for being let out of a near-by jail, where he is being kept for unspecified crimes. Jack then rides in a ramshackle bus thru scenes of hard times in the outskirts of the capital to the soundstage where the event will take place. Ostensibly, the tension of the film lies in the moral dilemma of doing such a gig “for a barbarian that can barely spell his name.” Hmm…

The main problem here is that as an actor and a personality, Dylan is far too wily and inscrutable to make much hay out of this. Granted, he did get a lot of big name Hollywood stars to join in and work for scale, but it’s a mixed bag. Aside from Dylan and Goodman, the main players are Jeff Bridges as cynical but conscientious journalist doing a story on the show and Jessica Lange as the steely network honcho with her eyes set on the bottom line. There are a lot of other big names here, but folks like Penelope Cruz (as Bridges’ ragamuffin girlfriend) and Luke Wilson (as Jack Fate’s musician pal) are underused, while others (Ed Harris, Val Kilmer, Christian Slater) are barely noticeable. And until I saw Masked and Anonymous I never imagined that I would be viewing a cinematic love scene between a sexagenarian Bob Dylan and Angela Bassett. But it’s that kind of flick.

On the plus side? Well, the promoter hooks up his star with a Jack Fate (i.e. Dylan) tribute band and the music kicks in with a garage version of “Down in the Flood” from their sideshow stage. There are strong renditions of “I’ll Remember You” and “Cold Irons Bound” as well as a few sweet surprises such a young black girl’s a capella rendition of “The Times They are A-Changing” which raises a half-smile from Uncle Bob. Much of the film is shot inside a hangar-type building, sectioned off into different stage sets, not unlike Frank Zappa’s film vehicle 200 Motels. The carnival ambiance sometimes evokes the feel of such Dylan evergreens as “Desolation Row.” This feel is enhanced by the sharp art direction and evocative location work. When Mr. Fate hops a bus to “Quadrant 4” it looks like it could be bedraggled Venezuela though the whole movie was shot in Los Angeles. Which sort of tells you something right there.

And that is where Masked and Anonymous begins to get under your skin. It’s atmosphere of slow, creeping dread, of being caught up in a dream world of absurdities where heroes are hard to identify,that makes it seem more relevant and relatable now. Dylan himself was one of those heroes for a lot of us growing up but now he looks as bewildered at us moving thru this landscape of “toil and blood, where blackness is a virtue and the road is full of mud.” He may be as sphinx-like as ever but as he meets our gaze as he rides way at the end, we feel he’s at least still there with us on the side of the angels. Long may he mumble.