Elton John had a very peculiar sort of fame when his pop stardom was at its apex in the early to mid-Seventies. He was a short, bespectacled, closeted gay man whose teenybopper audience was as expansive as the literary/musical ambitions of him and his songwriting partner, lyricist Bernie Taupin. From 1970-72, they rung up seven Top 40 hits in the U.S. (it would have been eight if “Tiny Dancer” hadn’t stalled at #41). It was an eclectic bunch of songs that included romantic swooning (“Your Song”), Fifties revivalism (the #1 “Crocodile Rock”), atmospheric balladry (“Daniel”) and Band-styled Americana (“Levon,” named after guess-who). While Elton increasingly became identified with his catchy melodies and oversized sunglasses, there was a lot going on just below the surface. Singer-songwriter Aimee Mann, for example, once remarked about how songs like “Levon” (who after all “was born a pauper to a pawn on a Christmas Day/When the New York Times said ‘God is Dead’”) were like a side door into a world of “adult concerns.” In 1973, the already prolific John-Taupin team had extra writing time when the production schedule for their seventh studio album was pushed back. When all was said and done, the pianist-singer and his crack band had enough material for a 17-track double album and Goodbye Yellow Brick Road would be the final step that would insure Elton’s place up on the mantle of that decade’s topmost pop idols. He hasn’t been down from there since. 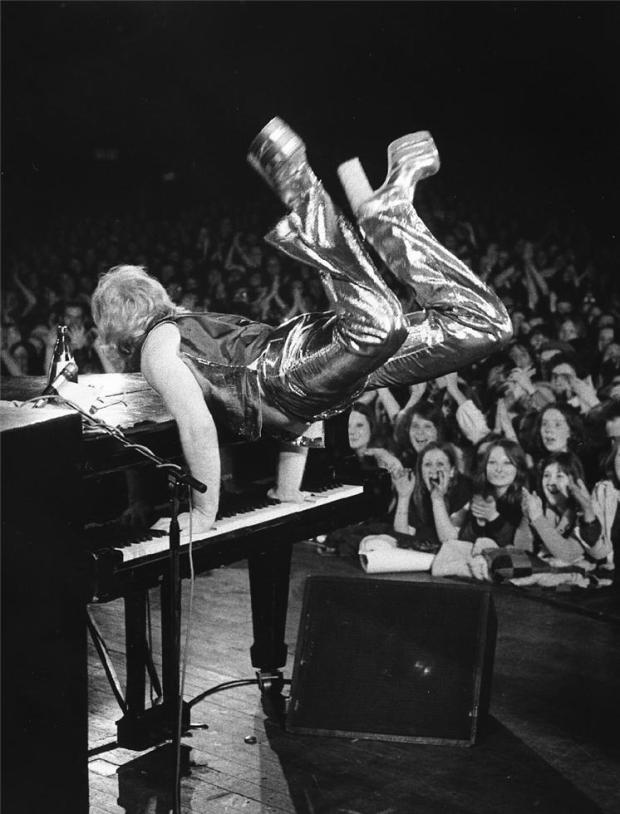 The album was recorded in two weeks in May of 1973 at France’s renowned Chateau d’ Herouville, the so-called “Honky Chateau” of a previous EJ album title. It was written almost as quickly—during a brief stay in Kingston, Jamaica where John and Taupin were holed up while trying to make arrangements (ultimately unsuccessful) to record there. The alacrity with which Goodbye Yellow Brick Road was conceived and committed to tape is pretty remarkable and may suggest a unifying theme. And while it is not strictly a concept album, the title and the cover illustration—Elton in satin jacket and platform shoes is seen stepping off a gritty sidewalk and onto that pedestrian byway that leads to the Emerald City—gives you a pretty good idea of the record’s semi-fixation on the fantasies and illusions that emanate from the silver screen.

Like many a double album, GYBR starts grandly, with the instrumental prelude “Funeral for a Friend.” This synth-heavy processional gains steam after a few minutes and segues into the end-of-the-affair rocker “Loves Lies Bleeding.” This emphatic up-tempo number is just the kind that John and his band started excelling a couple of albums before: propelled by his vigorous rhythm section of bassist Dee Murray and drummer Nigel Olsson, and complemented with flashes of Davey Johnstone’s lead guitar. The album is front loaded with some of its most well-known tunes. Side one fills out with the Marilyn Monroe tribute ballad “Candle in the Wind” and the glam-rock spoof “Bennie and the Jets.” The colorful but rather plodding “Bennie” was a #1 hit in the U.S. and Canada (in Elton’s native England is was relegated to the flipside of “Candle”) and its teen-dream lyric about the fictional Bennie (“She got electric boots and a mohair suit/You know I read it in a magazine”) shows that John and Taupin were cued in to the whole T.Rex and Bowie-Ziggy scene. In fact, Elton himself was joining that club with his increasingly outlandish stage show.

The title track kicks off the old side two, another huge hit and one of the songwriting duo’s most noteworthy collaborations. Against Elton’s rich, brooding piano melody, Taupin’s deft lyric of Tinseltown disillusionment (as reflected in the title) bears a passing resemblance to the classic 1950 film Sunset Boulevard with its stark depiction of the dark underbelly of Hollywood. Here, a kept man likens the town to a place “where the dogs of society howl.” Unlike Marilyn Monroe in “Candle”, who never knew “who to cling to when the rain set in,” our determined protagonist declares “you can’t plant me in your penthouse/I’m going back to my plough.” This is definitely the Lincolnshire-bred Taupin talking here, but whether the ex-farm boy or his pal Elton can ever escape the stardust allure is still open to question, as John’s dreamy ah-ah-ah harmony at the end seems to confirm.

This mood has its bookend in the smoky barroom ballad “I’ve Seen That Movie Too” that closes the first half of the album. In between are two songs of clear-eyed affirmation and self-knowledge that are GYBR highlights (“Grey Seal” and “This Song Has No Title”) and a regrettably snarky one (“Jamaica Jerk-Off”) that will preview the shortcomings to come on sides three and four. The melodic rocker “Grey Seal” is esp. great with its simple wisdoms (“On the big screen they showed us a sun/But not as bright in life as the real one”) born of nature. The band has never been as sharp, Dee Murphy’s percolating bass and Nigel Olsson’s galloping beat are infectious and Davey Johnstone’s guitar filigree matches the piano between chorus and verse for the right reflective touch before they join in a bust-out jam to close out the number.

To much lesser effect, side two is rounded out with the uncharitable “Jamaica Jerk-Off.” The plans that Elton and Bernie had for recording this album in the land of reggae seemed to be based solely on the fact that they liked the Stones’ Goats Head Soup, which had been largely made at Dynamic Sound studios in Kingston. They found the facilities there not to their standards (an inadequate piano and only “one microphone”) and ditched the idea. Instead of responding to this snafu by maybe admitting their lack of advance work, they took the opportunity to make a faux-reggae number depicting the people as lazy and rude. This unfortunate tune says a lot more about spoiled rock stars than it does about Jamaica, a very small and poor country which has sustained an amazing musical culture for decades. It also previews the lyrical pettiness that informs much of the second disc.

If I still had GYBR as a double LP instead of a single CD (where its 76 minutes are a snug fit) I wouldn’t have much use of side three anymore. Three of its four songs are misogynistic portraits of women (or girls) that are extremely unlikable tunes when one gives them more than a cursory listen. “Sweet Painted Lady” is a rank reminiscence of a harborside hooker where the sailors “leave the smell of the sea in your bed” and where observations like “many have used you and many still do/there’s a place in the world for a woman like you” passes as philosophy. “All the Girls Love Alice” sounds like a nifty up-tempo number but then there’s the lyrics: Alice is an underage lesbian temptress in London’s Soho district who ends up getting murdered in the subway. This doesn’t prevent her from being called “a sixteen year-old yo-yo” in the following verse. And the less said about “Dirty Little Girl” the better, unless your thing is physically abusing street waifs (“Someone grab that bitch by the ears”).

I mean seriously, WTF? Amazingly, in our supposed “woke” age, you’ll never hear a peep about any of these tunes. You can scroll down the comments on any of them on YouTube and all you’d hear about is how they’re “underrated,” that is, not a hit single. Paradoxically, it was in pre-PC era that these songs could spark contempt. In Rolling Stone’s Nov. 1973 review, eminent rock scribe Stephen Davis called these tunes “misanthropic in their anger” and took particular offense at “Sweet Painted Lady.” Said Davis: “Elton and Taupin have a repository of nerve just to record this; amazingly they get away with it.” Forty years later, in a piece about this album’s deluxe re-release, the same magazine gushed its uncritical praise and spent several sentences fawning about how non-entities like Ed Sheerhan and Fall Out Boy contributed to a bonus disc of cover versions. Yes, music journalism has come a long way in the wrong direction. 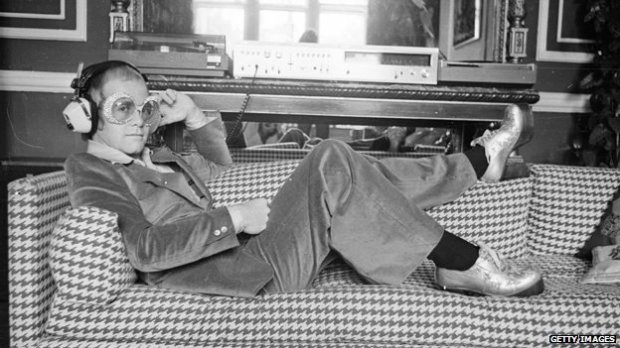 Goodbye Yellow Brick Road does rebound on the old side four, starting off with two high-energy numbers, “Your Sister Can’t Twist” and the hit “Saturday Night’s Alright for Fighting.” The latter song shows a more successful model for songwriting, with Bernie using the wild weekends of his provincial teendom as specific yet universal inspiration. But the appeal of the “Roy Rogers” may just depend on your penchant for old Westerns and the ho-hum drinking song “Social Disease” suggests again that this songwriting team didn’t quite have the surplus of great material that they thought. The album closes somewhat satisfactorily with the attractive ballad “Harmony.”

Far be it from me to counter the old adage that nothing succeeds like success. GYBR has sold some 30 million copies worldwide and its reputation as Elton’s best album is not about to shake loose anytime soon. Take the best material off this and his previous four albums and you’ll have a compilation of some of the best pop-rock of the early Seventies. But the excesses of that same era drag down the highlights of this double album, though you may never know it in our present time, where critical thinking on these matters has gone by the wayside.