(The shuttered Danvers State Hospital in the late Nineties. Danvers State was once dubbed “the bad vibes capital of the Northeast” by the Boston Phoenix. I certainly felt it that day. Click on photos for larger view.)

To expand a little bit on the subject of this week’s selected documentary is difficult. But to expand on it “a lot of bit” (as my son used to say) is far easier. The topic of abandoned state-run institutions, and their distinctly spooky allure, has really taken off in the Internet age. The timing was perfect. Many such places, which warehoused society’s forgotten people in sprawling complexes of gothic-type structures, closed in the 1980s, in the age of Reagan-era budget cuts and a shift to community-based care in the treatment of people with mental and physical disabilities. The older state facilities had usually been built on leafy campuses on the margins of metropolitan areas and were soon infiltrated by members of the new urban explorer movement, an activity that combines thrill-seeking with amateur anthropology. Some of the participants were also talented photographers. Finding an audience, and each other, on websites like DarkPassage.com, these people gave a whole new meaning to the term “asylum seeker.”

In our age of autism awareness and 10K charity races for most major medical maladies, it’s fascinating to go back and see the lax standards that prevailed just a couple of generations ago. Willowbrook State School, featured in “Cropsey”, was known for living conditions that are hard to believe in today’s wised-up world. Robert F. Kennedy made a fact-finding visit there in 1965 while U.S. Senator from New York, famously referring to it as a “snake pit.” But his suggested improvements were slow in coming. Several years later, a guy named Geraldo Rivera first gained national attention when he brought a local news crew into the overcrowded facility, filming mentally disabled children, some naked, writhing on the floor in agony. (John Lennon and Yoko Ono saw the televised report and were moved to do a pair of benefit concerts—later released as “Live in New York City”—that were to be Lennon’s last full-length live shows). Even with these exposes, and further revelations by Staten Island newspapers, the last of Willowbrook’s residents were not moved out until 1987.

I grew up not far from one of the most infamous of such places. Danvers State Hospital in Massachusetts was opened in 1878 and from my earliest days I remember it looming high above U.S. Route One on a dome-shaped hill surrounded by sloping farmland. Later in life I would find out that it inspired horror writer H.P. Lovecraft’s Arkham Asylum, which in turn was incorporated into the Batman universe. Interesting, as the place was one of many built on the idealized Kirkbride Plan. These imposing, gabled Victorian compounds had a staggered “bat-wing” layout that were meant to allow for maximum, beneficial sunshine for mentally-ill patients who were to be treated with new and enlightened methods.

Unfortunately, Danvers State became better known for electroshock and frontal lobotomies than for enlightenment. Again, overcrowding had a lot to do with the deteriorating conditions, as people with symptoms nowadays treatable with prescription drugs were shoehorned in with legitimately dangerous patients.

Growing up in West Peabody some four miles away, we kids amused ourselves with scare stories about escaped lunatics from the “Nut House” who made their way down the hill to the apocryphal Danvers Road, a shadowy lover’s lane. Thankfully, our tall tales of the unfortunate couples who parked there were more imaginative than our naming of the road. 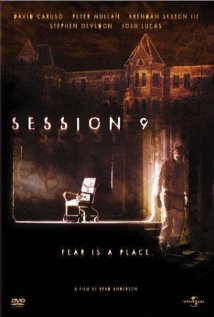 In 2000, I was working for Scout Productions in Boston as a location manager. One day, director Brad “Next Stop Wonderland” Anderson was in a pre-production meeting with a few others at a table near the desk where I was working. I had already heard something of the project that would become the 2001 asylum thriller “Session 9” and I took the liberty of chipping in an idea or two. That would have been a great movie to work on but I was a location scout and none was needed in this case. That’s because the entire movie was to be filmed at Danvers State. Anderson had taken advantage of an initiative by the Massachusetts Film Office to attract filmmakers by allowing free use of any abandoned state-run property. The plot concerned an asbestos-removal crew who get swept up in the evil spirits still radiating from the ruins. Although there was a fairly big star (David Caruso) in the cast, the real main attraction was obvious. From the aerial shots of its massive gothic outline, right down to the skin-crawling claustrophobia of its service tunnels, you just can’t get enough of this place. Although “Session 9” was hampered a bit by its under-developed narrative, it’s still a decent psychological thriller and a valuable time capsule since the site was redeveloped into generic-looking condos. At least the façade of the central section was kept, as seen here in a recent photo I took.

While the behavior of some patients at these places was undoubtedly beyond the pale, the sad legacy of these state hospitals is that untold thousands were committed for reasons that would seem outrageous today (the proverbial “nervous condition” was oft-used). Cast off by unscrupulous or overwhelmed family members and ill-treated by the state, many ruined lives ended there unceremoniously. As a final indignity they often were buried on the grounds in plots marked only by a number.

Here’s my son surveying the spartan landscape of the patient’s cemetery at Danvers State. 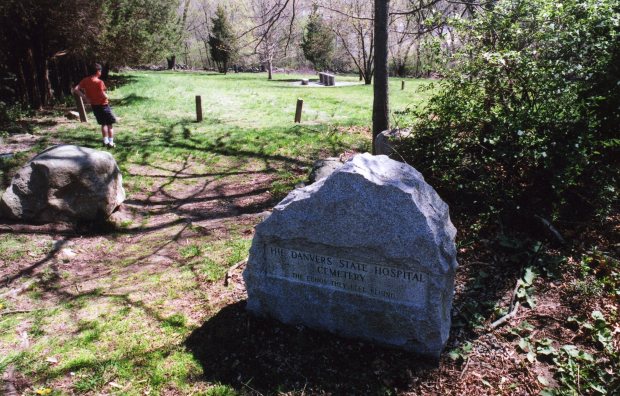 In the foreground is one of the recently installed memorial markers. The inscribed numbers are on small gravestones are set flush to the ground. Matching up the numbers to names is not very easy when closed-down institutions kept the records. There are efforts underway by surviving relatives to have the state do more to identify the deceased. But that’s another tangent of this topic, which has legs like few others. More of that in Part Two….