The sessions that produced this landmark double-album by Miles Davis, released fifty years ago this week, began precisely one day after the Woodstock festival concluded. On August 19, 1969 at 10 AM—exactly 24 hours after Jimi Hendrix concluded the events in upstate New York with his legendary set—the 43 year-old Davis and his talented cast of young sidemen shuffled into Studio B at Columbia Records down in Manhattan to start work on Bitches Brew.

The timing has a nice symbolic ring to it. Bitches Brew has always been seen as a touchstone recording that fused the worlds of modern jazz and heavy rock. Actually, Miles had been leading up to this magnum opus with the four studio albums he released in 1968 and ’69, especially In a Silent Way and Miles in the Sky. Electric instruments and groove-like jams became more predominant and the players he had under his wing (Herbie Hancock, Wayne Shorter, Chick Corea, John McLaughlin, Joe Zawinul and others) would all become key players in the jazz-rock “fusion” genre that took flight in the Seventies.

Bitches Brew even today sounds adventuresome in an almost eccentric way. Many jazz purists were skeptical or downright hostile, rock fans were more welcoming. Weaned on the improv excursions of Cream and Hendrix’ Band of Gypsies, they helped get the album up to #35 on the Billboard pop charts. Over time, of course, it would be generally recognized as a masterwork. But not classic in the sense that Davis’ 1959 Kind of Blue is viewed. The more traditional Blue is the best-selling jazz album in history, while it took Brew thirty-four years to go platinum.

Thanks to this ten year-old issue of Jazz Times for many of the anecdotes in this post.

The 20-minute “Pharaoh’s Dance” takes up all of the old side one. It kicks off with a steady cymbal-riding rhythm, plus the brooding bass clarinet of Bernie Maupin and the whirling keyboards of no less than three electric pianos, played by Zawinul, Corea and Larry Young. Davis enters the picture at 2:30 with a trumpet solo that grows in volume and burns with intensity—a far cry from the cool and controlled tone he was once known for. Here he is blowing his horn over two sets of crashing drums (Jack DeJohnette, Lenny White) and the fevered conga slaps of Don Alias. At around seven minutes, John McLaughlin makes his presence known with some nervy electric guitar fills before the piece slips into a trippy section marked by Miles’ echoed trumpet.

That brief passage is an early indication (at least for the layman’s ears) of one of Bitches Brew central features: the use of editing and loops to mold a finished product from the extended sessions where producer Teo Macero let the tapes keep rolling (he an Miles would piece together the finished product later). This use of the recording studio as an “instrument” had been popular in rock music at least since the Beatles’ Sgt. Pepper but was pretty unusual (even controversial) for jazz, where an organic group effort would work in unison for a best take.

As Davis leads “Pharaoh’s Dance” to its dynamic conclusion with some sharp staccato runs, you get the full sense of just how big this post-bop wall of sound is. This track features three horn players, three keyboardists, two drummer, two percussionists and both acoustic and electric bass. The rest of the LP features the same massing of players, a clear departure from be-bop’s quartet and quintet conventions.

Next up is the alpha-dog title, another side-filler, this one at an envelope-pushing 27 minutes. The famous opening theme is a “tempo rubato” set piece with reverb-soaked electric piano and Miles’ stentorian trumpet blasts. It sounds like a clarion call from a distant planet. At the three-minute mark a groove starts up—you can hear the leader snapping his fingers in time—with clarinetist Maupin and bass guitarist Harvey Brooks kicking it in (Dave Holland plays the stand-up bass). It predictably builds up momentum in the tenacious, if occasionally disheveled, manner of this album. Miles lets rip another upper-register solo until overtaken by McLaughlin’s guitar and a return to the rubato. Another jam follows with noticeable edits until the clarion blasts return to end it. 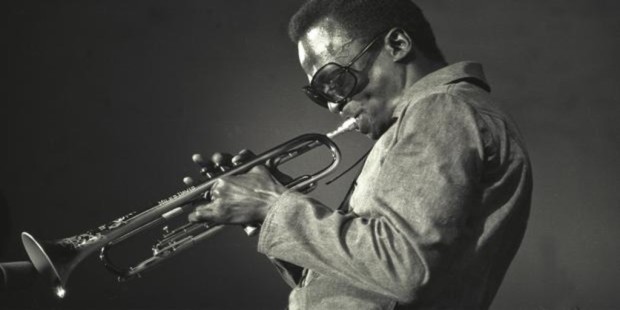 The whole effect is bracing, radical and a little disjointed. But Bitches Brew was the was the whole package, otherworldy right from Abdul Mati Klarwein’s Nubian fantasia gatefold cover art down to the very last groove etched into the vinyl. Still, some listeners likely had jumped off the bus by this point. Donald Fagen, whose Steely Dan was a rock band informed by its love of jazz, has said that the album “was essentially a big trash-out for Miles. It sounded like he was trying for a funk record and just picked the wrong guys.” Davis also took plenty of heat at the time from his colleagues. Holland has told Jazz Times of a backstage scene at the Village Vanguard club in New York. “His older friends (were) telling him he was destroying jazz. But Miles stuck to his guns.”

That, of course, was just like Davis. He was an uncompromising, sometimes menacing, personality, whose life mission seemed to be staying one step ahead of everyone, all else be damned. His influential, forward-thinking sensibility can esp. be heard on side three’s “Spanish Key.” Here is a more straightforward avant-funk jam, the kind that would go on to inspire future R&B and hip-hop artists. It’s also a coming-attractions showcase for future fusion stars, featuring brilliant solos from saxophonist Wayne Shorter (Weather Report), Chick Corea (Return to Forever) and John McLaughlin (Mahavishnu Orchestra). The next track is even named for the guitarist, a piquant guitar workout that, at 4:36, is the only cut that is less than ten minutes.

The aptly-named “Miles Runs the Voodoo Down” is a stunning 14-minute number whose smoky groove makes it initially sound like one of the LP’s more laid-back tracks. Here both Holland and Harvey Brooks take up the electric bass, Don Alias joins Jack DeJohnette on drums and Maupin’s down-low clarinet completes the rock-solid rhythm section. Miles’ skittering runs eventually build-up to an exciting (if chaotic) plateau with Corea and Joe Zawinul soloing simultaneously on electric piano before Davis re-enters with his some of his most sensuous playing on the album.

The title and first few free-floating minutes of “Sanctuary” give the impression that Bitches Brew will go out on a (relatively) reflective note. But nothing on this revelatory record is that simple and when the clattering drums enter the picture you realize that there is no easy sanctuary in this world and the abrupt ending is as enigmatic as the man would have it.

Most of the standard 2-CD editions of Bitches Brew include the excellent add-on track “Feio.” Naturally, there are a few kitchen-sink BB box sets to choose from, centered on the 40th and 50th anniversaries. One related release that I like is the one-CD Bitches Brew Live. It is split between Miles’ July 1969 performance at the Newport Jazz Festival (one month before the BB sessions) and his full August ’70 set in front of 600,000 rock fans at England’s Isle of Wight.

The career of Miles Davis took a typically unusual turn not long after Bitches Brew. Next up was the even more rockist Jack Johnson and a few similar releases. But not long after the poorly received (initially anyway) On the Corner, Miles took a five-year hiatus, saying he “couldn’t hear the music anymore.” (A typically strange but astute but Miles-ism). After his self-imposed exile, Davis retained his popularity if not his cutting-edge status; that period is perhaps most known for his crowd-pleasing versions of such pop hits as Cyndi Lauper’s “Time After Time” and Michael Jackson’s “Human Nature.” In concert, he still could rip it up as I witnessed when I saw him at Newport in 1989, two years before his passing. He had the hipsters in awe and many of the wine-and-cheese blanket-sitters scratching their heads, a true maverick right to the very end.