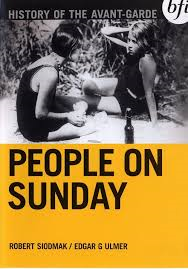 The leisurely and lovely “People on Sunday” is considered an early classic of German cinema by many film scholars, critics and lay viewers lucky enough to have come across it. However, this 1930 work (“a film without actors” we are told off the top) has never gained the wider cache of other inter-war films from that country, like “Metropolis” or “The Cabinet of Dr. Caligari.” It’s not for a lack of pedigree. It was scripted by a 23 year-old Billy Wilder with help from Curt Siodmak and directed by Robert Siodmak, brothers who would also move to America and produce a number of notable thriller and sci-fi movies. The same distinction also holds true for its Austrian-born producer Edgar G. Ulmer, who would go on to make “The Black Cat” and “The Man from Planet X.” The cinematographer was Fred Zinneman, who one day would direct such Hollywood classics like “High Noon,” “From Here to Eternity” and “A Man for All Seasons.” This quintet, all in their early to mid-20s, were joined by five equally young non-professionals to act as versions of themselves and shot “People on Sunday” pretty much DIY style over the course of several weekends in Berlin over the summer of 1929. Together, they perhaps unwittingly conjured up the first indie-style “youth” movie, a languid ode to those threshold years where childhood is still close in the rearview mirror but adulthood has not yet been beset by burdening responsibilities (an angle further emphasized by the viewer’s retrospective knowledge of what will happen in Germany in a few years). But all that fades as soon as one is drawn into the film’s gentle orbit. It’s no wonder that an online trailer for the Criterion DVD, where they always give “3 Reasons” as to why you see this release, lists “The timelessness of twenty-somethings” as the first.

“People on Sunday” was not the first time that feature films had centered on the colorful vicissitudes of young adulthood. Silent comedy greats Harold Lloyd and Buster Keaton had both recently starred in campus comedies (“The Freshman” and “College,” respectively) but their setting was just a different playing field for the usual hilarious antics and aspirational storylines. The novice filmmakers in the cultural hothouse that was Weimar-era Berlin were coming at things from quite a different angle: they were influenced by both the avant-garde “city symphony” movement of the Twenties as well as the emphasis on naturalism popular then among many artistic types in the capital. Central Berlin, as well as its outlying districts, plays almost as big a role as the people cited in the film’s title, a lovingly and luminously photographed bustling world city of four million souls of which five are singled out. In the opening moments, the film’s nominal lead character (Christl, identified as a real-life film extra) waits somewhat anxiously outside the giant Banhof Zoo Station, perhaps expecting someone who may not show. She is circled by a confident-seeming young man in breeches named Wolfgang, a wine trader by trade. Wolf, as he will fittingly become known, eventually draws her away with an offer to buy her an ice cream. The cute but moody brunette doesn’t take kindly to Wolf’s initial line of questioning (“Nobody stands me up!” Christl declares, wanting to believe it) but soon the two are planning a different rendezvous: a double date of sorts with the two pairs of friends to meet at a recreational area in Berlin’s lake district the next day: Sunday, of course. Christl and Wolfgang part ways with a charming series of awkward handshakes.

We quickly meet the other players in sharp establishing vignettes. Christl’s friend Brigitte is a soulful-looking blonde (a bit of a ringer for “Lost in Translation”-era Scarlet Johansson) who is introduced to us outside her place of work, the Electrola record and music store. She is directing the finishing touches on a window display and is said to have recently sold 150 copies of a 1929 jam called “In a Small Pastry Shop.” Wolf’s pal Erwin is a husky taxi driver who is the only one of the four who is attached: he shares a small apartment with his girlfriend Annie. As opposed to the more lively Erwin, fashion model Annie is a persistent recliner who seemingly only stands to go from the divan to the bed. This is a stalemated couple—-Annie is keen to see the latest Greta Garbo film but is reminded it’s playing until Tuesday—and when she can’t shake her self awake the next morning he takes up Wolf’s offer of a day out.

Sunday arrives on the wings of an extended montage that owes much to Walter Ruttmann’s 1927 classic “Berlin: Symphony of a City.” The well-dressed day trippers are out in force as pedestrians and transport riders, their comings and goings a whirlwind of trains, cars, omnibuses, grand avenues and signs or advertising hoardings in handsome old-timey fonts. The two pairs meet at Nikolassee station (the girls a bit bashful, the guys pseudo-cocky), a gateway to the lakeside recreation area in Berlin’s expansive semi-rural outskirts. Once they make their way down to the water, and find a place to demurely change into their bathing suits in the tall beach grass, the rest of “People on Sunday” unfolds like a lost dream of summer. The frolicking, the flirting, the lolling about, the music (Brigitte has brought along her portable phonograph), the petty cruelties quickly forgotten—-it’s all here and lovingly rendered by the budding talents behind the camera. During the splashing around, Wolf (unsurprisingly) gets a little forward with Christl, who quickly shows she’s pretty handy with a slap upside the head. Soon after, he turns his attention to Brigitte and the new couple shares a dalliance (and maybe more) in a near-by woodlot while the camera does an artful 360-degree pan of the treetops above them.

But even this reversal of fortune doesn’t weigh down the overall sunny vibe and almost as much time is spent in a semi-documentary snapshot-in-time of pleasure-seeking folks with whom the quartet circulate. It’s fascinating and awful to consider that in five years Hitler would have full dictatorial powers. Who among the many faces we see at the Nikolassee would want that? The film is not clairvoyant—-in fact, “POS” has a pretty sparse screenplay from Billy Wilder (with few dialogue title cards) especially coming from a guy who would go on to direct and co-write such fully-scripted gems like “Sunset Boulevard” and “Some Like it Hot.” But it does have acute observational instincts and it’s hard to discern here how the economic insecurities and shame of defeat in World War I, so exploited by the future Fuhrer, are bothering these people on that Sunday. The only hint may be a cryptic sequence where a solitary man sits and pensively stares at a war memorial. 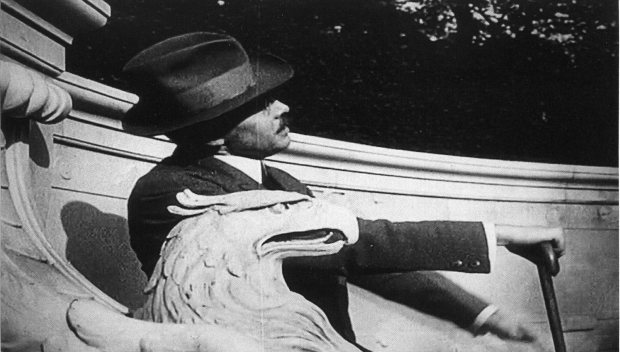 A better guess might be that the vast majority of people (on Sunday or otherwise) would prefer to go about their business and otherwise be left the hell alone. (At the end of the film, the principals claim nothing more than an anticipating look forward to the next weekend). That autocratic sociopaths and manipulative power structures that spend so much energy exploiting citizens’ fears, self-doubts and prejudices instead of appealing to their better natures is a universal historical problem and not within the scope of this film’s intentions. But it’s a problem that reaches into even the most supposedly secure democracies, as we see today in the country where the producers of “People of Sunday” emigrated to to help build the world’s most iconic movie industry. The youth culture that would take hold about ten years after WW2 can be seen in embryonic form here. And while “POS” may not be a direct predecessor to all that came later (whether it be “Beach Blanket Bongo” or “Dazed and Confused” or “Reality Bites” or whatever) it certainly was among the first to tap into the spirit of those romanticized and restless years, and did so in such enduring style that you could easily expect to meet these people on the streets of Berlin today.