When it comes to summer movies nowadays, thoughts quickly turn to the long parade of loud and hyperactive superhero movies or maybe the unforgiving clatter of the latest Michael Bay-directed cinematic miscarriage (I bet the sixth installment of the Transforrners series will arrive right on schedule in July 2019). In today’s movie-going world of attention-deficit editing and heavy metal decibel levels, endured from a reclining seat at your local multiplex, it seems more gratifying than ever that anyone would make a film like the minimalist, achingly felt and lovingly rendered Tu Dors Nicole (“Nicole, You’re Sleeping”). This is a summer movie in the sense that the season itself seems to be a main character. This quiet Quebec indie moves slowly to the rhythms and rituals of the dog days. But against the humid backdrop of mini-golf, bike rides, soft serve ice cream and swimming pools, there plays out a piquant drama of an insomniac young woman trying to shift her life out of the neutral gear that people often find themselves in between late adolescence and full adulthood. 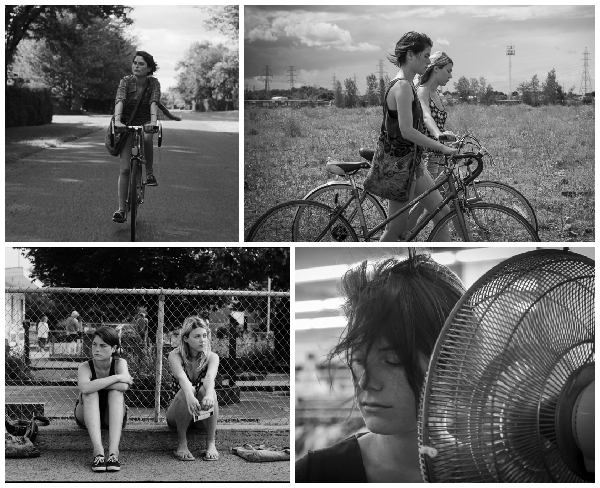 Nicole (Julianne Cote) is a serious, freckle-faced woman in her early twenties, living at home and working in a large thrift store in an unnamed provincial town. As high summer approaches, and with her parents gone on an extended vacation, she leafs through the mail in the shade of the backyard. While a harp is gently plucked on the soundtrack, her face lights up as she opens an envelope containing her very first credit card. Her friend Veronique (a soft-featured blonde played by Catherine St-Laurent) jokingly asks if she should now call her bestie “Madam.” But it’s quickly apparent that Nicole, still not grown all the way up, is destined to dream-walk straight on through August—except for the fact that she can’t seem to get to sleep. 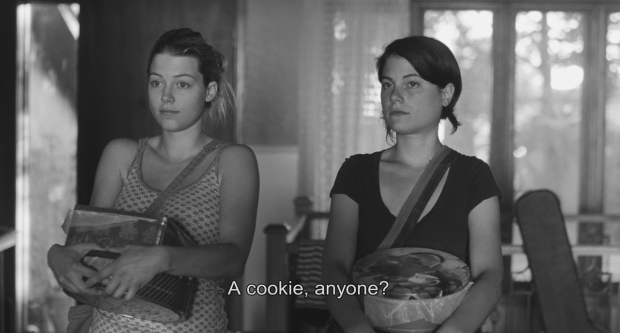 The duo of Catherine St-Laurent (left as Veronique) and Julianne Cote (as Nicole) is not dissimilar to the pairing of Scarlett Johansson and Thora Birch in the Terry Zwigoff film “Ghost World.”

In the film’s opening scene, a restless Nicole rises from the bed of her one-night stand to take her leave at dawn. When the guy informs her “You’re hard to follow” after she politely declines his offer for more “fun” (“We already had fun”) it feels instinctively that both are right. Maybe she just needs some time to think her way forward but that becomes a lot more difficult when she discovers her 30-ish brother Remi (Marc-Andre Grondin) has moved back in with his indie-rock trio in tow. Setting up in the parents’ bourgeois living room, they seemed determined to spend the summer in unproductive rehearsals and obsessive sound-level adjustments. In the outdoors, the girls go through the motions of what used to be the carefree, lazy days of school vacation. After tallying up the score following a round of putt-putt, Veronique allows that “This used to be more fun.” Martin, a neighborhood boy of about twelve with a prematurely deep voice, provides some comic relief but also represents the film’s emotional center, with his strangely mature but nonetheless charming crush on Nicole. “The heart has no age,” he confidently tells her, adding; “You can’t deny love forever.” These words will linger even when Nicole and Veronique hastily plan a getaway trip to Iceland on the credit card. 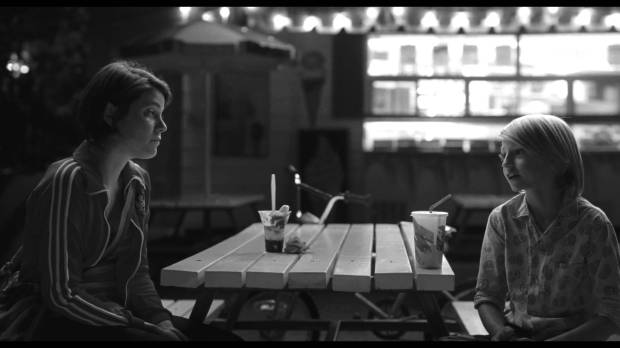 Nicole and her young suitor Martin having a heart-to-heart at the ice cream stand.

Despite its minimalist methodology, many veteran watchers of indie films should find it quite easy to fall under this work’s unassuming spell. The talented cast is spot-on and Lafleur’s assured direction is complemented by the radiant Zone System cinematography and imaginative, almost Lynchian sound design. “Tu Dors Nicole” is a feast for the senses (esp. in the Blu-ray version that I watched) and you can almost feel the summer heat shimmering off the screen. And although it’s more of a snack when it comes to the emotional content, the film ends up being quite affecting in its own muted way. Inevitably, the girls’ friendship is put to the test (“We’re like an old couple,” Nicole tells her brother’s drummer, with whom she shares a fleeting mutual attraction) and at the end of it all comes the expected nudge off the stasis point. After blowing off steam like the Icelandic geysers she’s intended on visiting, it’s time for Nicole step off that spot and into the adulthood where most of life’s real adventures will take place.