From their humble beginnings as a family singing group, the Bee Gees went on to become one of the biggest selling popular music groups of all time. The three Gibb brothers reached their commercial zenith as the dominant act on the 1977 Saturday Night Fever soundtrack, which has sold some forty million copies worldwide. Although their early AM hits and the iconic disco workouts of Fever remain in steady rotation in various radio formats, little if anything from Odessa graces the airwaves anymore. This lushly packaged double LP hit the stores in early ’69 and although it did achieve a measure of success (#20 in the U.S., #10 in the U.K.) the album was hindered by the lack of a monster single to sustain its reputation. In fact, a dispute between two of the brothers over what song to release as a 45 caused a fissure in the band that would take a couple of years to patch up. An impressive set of progressive pop compositions beautifully sung and performed, Odessa could be a fresh discovery for those who have long extolled the virtues of the much-worshiped Pet Sounds. Like that classic album from the Beach Boys (also a family-based group) Odessa elevates a teenage art form into a sophisticated new realm without ever seeming pretentious.

“First of May” was the only single released from the double album and only got as high as #37 in the U.S.

Born on England’s Isle of Man, older brother Barry and twins Robin and Maurice honed their close harmony style from an early age. Their family moved to Australia in the late Fifties but after topping the Down Under charts in 1966 with the immortal “Spicks and Specks,” the brothers headed back to England. They fell under the auspices of impresario/producer Robert Stigwood, who heavily promoted the band and helped them hone their signature style on yearning, melancholic ballads like “To Love Somebody” and “Massachusetts.” 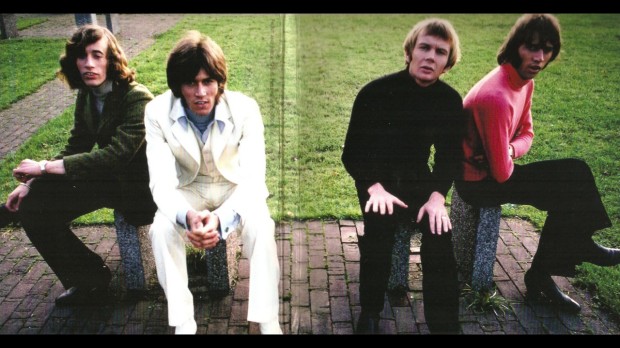 The Bee Gees in 1969, with drummer Colin Petersen, second from right, still a full member with the Gibb Brothers.

By the end of the Sixties, with high-aiming records like Sgt. Pepper and Days of Future Past all the rage, the Bee Gees made their move. The curtain-raising title track clocks in at 7:30 and features Maurice’s Spanish guitar and solo cello by guest Paul Buckmaster. The nautical imagery and historic references presage the work of artists like Al Stewart and (much later) the Decemberists. The boys even work in a new wrinkle on their usual theme of dealing with romantic setbacks, courtesy of the eyebrow-raising refrain, “You love that vicar more than words can say.”

But with seventeen songs to work with, there is no shortage of the Bee Gees’ stock-in-trade balladry, that keening heartache delivered by the famous high-pitched voices and insistent vibrato. Because tunes like “I Laugh in Your Face”, “Sound of Love” and “Never Say Never Again,” (“You said goodbye/I declared war on Spain”) sound familiar despite their relative obscurity, Odessa sometimes seems like a template for the elegant pop songcraft of a lost era. This craft extends to the musical performance. Drummer Colin Petersen kicks into gear when the group stretches stylistically, especially on an early foray into funk at the end of “Whisper Whisper.” There’s also a fun homage to The Band (“Marley Purt Drive”) a jaunty hoedown (“Give Your Best”) and an eccentric ode to Thomas Edison.

Despite the album’s long string of top-notch lead vocals by Barry and Robin Gibb, it may be the “quiet” brother Maurice who’s the unsung star here. Playing a variety of keyboards in addition to his bass duties, he comes to the fore on the loftier second disc, his grand piano leading the way on the orchestrated instrumental “Seven Seas Symphony.” He also takes full advantage on his one vocal showcase: “Melody Fair” is maybe the loveliest tune on a record chock full of them. Despite his reputation as a stabilizing presence in the midst of two more ambitious siblings, Maurice (who died in 2003) couldn’t prevent the rift caused when Barry’s “First of May” was chosen as the single while Robin’s “Lamplight” was relegated to the b-side. Robin (who passed away in 2012) was out of sorts over the notion that his older brother was being pushed out to center stage and split for a solo career.

Although Barry and Maurice carried on as a duo (Cucumber Castle, anyone?) the trio eventually re-united and re-defined themselves for the Seventies, leading to an outbreak of white leisure suits, exposed chest hair and those little spoons hanging around the neck. After Saturday Night Fever the excesses of the decade caught up with the Bee Gees, as Robert Stigwood insisted that they star with Peter Frampton in a mega-movie based on the Beatles most famous album. Seized by what was reported to be a sort of collective cocaine psychosis, cast and crew turned Sgt. Pepper’s Lonelyhearts Club Band into a garish and silly film musical that was universally loathed. It is worlds away from the classy accomplishments of a work like Odessa, where ambition was happily married to good instincts.
—Rick Ouellette