A soon-to-be former Facebook “friend” recently sent a very simple question, using white words on a black background: “Can you name a President that didn’t lie?” He then quickly added the first comment before apparently fleeing the scene, “Go ahead, make my day.”

Brilliant, no? In came a rash of replies, many of them actually indulging the poster by naming their choice of a non-lying or least-lying American head of state. Jimmy Carter, Lincoln, FDR and George Washington were all offered up. More promisingly, some people sniffed out his gambit, answering with the usual Trump-hating retort that he “lies as he breathes.” That would have been my first impulse, but after a recent rash of such social media sleights-of-hand I paused.

The whole question was a grotesque false equivalency. I replied, “That’s like asking ‘Who never stole some office supplies?’ to make it seem like the same offense as someone who blows up the office building with all the workers inside.”

Hey, it got one Like anyway. The comments continued, Washington was named again. I tried to bring poster out of hiding, calling him out with the question, “Care to join us?” Nothing. Unfriend and move on. 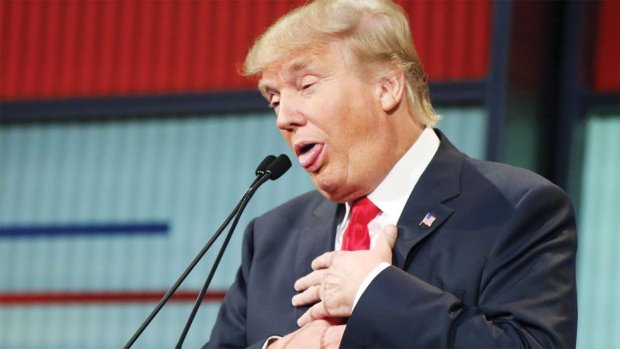 Apparently, it’s OK for an American president to sit on his now blood-stained hands and do nothing for a whole month as a pandemic raged across the planet, claiming that there was only one confirmed Covid-19 case and that it was a hoax of the opposition Democratic party. Then when it got to the point where even the intellectually-void narcissist who goes by the name of Donald Trump couldn’t deny the scope of this disaster, he of course knew about it all along even though he was just calling it a hoax while the death toll climbed to over 20,000. That’s OK, because Everyone Lies.

The sniveling dishonesty (or ignorance) of that Facebook poster was esp. troubling to me. In a better world, it would be common knowledge that people in many walks of life (not just politics) sometimes bend the truth to win people over to their way of thinking. That is bit different from the actions of a demented demagogue like Trump whose whole perversion of a life has been one gigantic lie.

Covid-19 may be a terrible global pandemic, but Trump is a uniquely American form of moral plague. He’s the son of a Nazi-sympathizing landlord father who started Donnie off with a cold shoulder and a small loan (actually, a shady $14 million trust).The story could have ended there. With a few safe investments, this spoiled dimwit could have lived the life of a callous playboy and left the rest of the world alone. But no. Somewhere “The Donald” developed a chip on his shoulder that was as big as that world he would someday try to fuck over. Having no discernible talents yet possessing a malignant compulsion to be the center of attention, Trump achieved that most (ugly) American of goals: being famous for being famous. Everything else has been tasteless buildings, bankruptcies, failed casinos and airlines, legal entanglements, admitted sexual assaults, unpaid contractors, and the insipid “Celebrity Apprentice” TV show where he lorded over pathetic ex-stars like Gary Busey.

But that ability to focus all attention on himself, most often by denigrating “elites,” minorities and the underprivileged, was underestimated by many on his way to an Electoral College victory in 2016 (though he lost the popular vote by a hefty three million votes). Yes, he released a tidal wave of latent racism and made hostility a virtue for millions of (mostly white) Americans whose own sense of powerlessness is often unfocused or greatly exaggerated. Of course, psychiatrists have had a feel day for the last few years. One aspect that I like is Trump supporters’ receptivity to a “primitive morality” of might-makes-right, which is normally grown out of by age five or six. To people who never outgrew this, or have reverted, this cartoonish display of power is more important than real-world abilities. It is also inherently violent (this includes economic violence), even to the point of followers happily becoming his victims. Is it any wonder he “loves the poorly educated”? Trump is so boxed in with legal issues and Russian duplicity, that his only choices now seem to be remain President or go to jail. He has now become the American Death Merchant who also wants to be king.

This is not new. In this exceedingly disturbing photograph, Trump and his null-and-void wife Melania, grinning maniacally like the very Angels of Death, pose in El Paso with the baby whose Hispanic parents had just been murdered in that week’s mass shooting. One columnist suggested that to Trump, this baby is “little more than a hunting trophy in his own brutal race war.” That may explain why Trump is insanely giving a thumbs-up.

Trump wants “total authority” but “takes no responsibility” and because he was afraid for his re-election prospects, we have now seen 32,000 die (as of April 16th) from this “hoax.” Some 22 million Americans have filed for unemployment and you can’t go anywhere anymore without feeling you could be the next to go. But this infantile ghoul has accomplished his one central goal in life: love him or hate him, everyone is thinking or talking about him all the time. But even the Death Merchant can’t escape immortality. And though John Donne, in his “No Man is an Island” poem said that “Any man’s death diminishes me,” I’m not sure that will ever apply to someone who has so divided us into many little islands, first politically then physically into a social distancing archipelago that could last on-and-off for years. So when it’s Trump’s time to go, feel free to ask for whom the bell tolls. Because it will toll not for thee but only for he, and the rest of us will be much better off whether we care to know it or not. 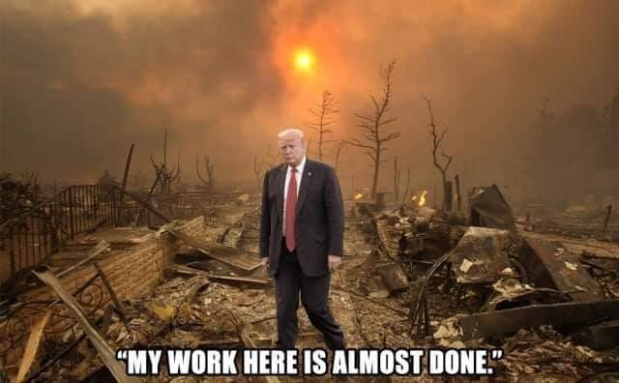