Outside of the biggies like Sundance, Toronto and Cannes—with their star power and acquisition deals—film festivals are usually fun but rather sedate affairs. You go and see an indie movie or shorts collection, be supportive during the Q&A afterwards, maybe go to a wine and cheese reception and hobnob a bit. This is the kind of film fest I go to and there are plenty to choose from. But the one I attended in mid-September in Coney Island was a breed apart. It’s even smaller than most; situated in one building on Surf Ave. (parallel to the boardwalk) and run by the non-profit arts organization Coney Island USA. Inside they have two venues: bleacher seating downstairs at Sideshows-by-the-Seashore performance space and upstairs at the Coney Island Museum with seating set up in the main room. 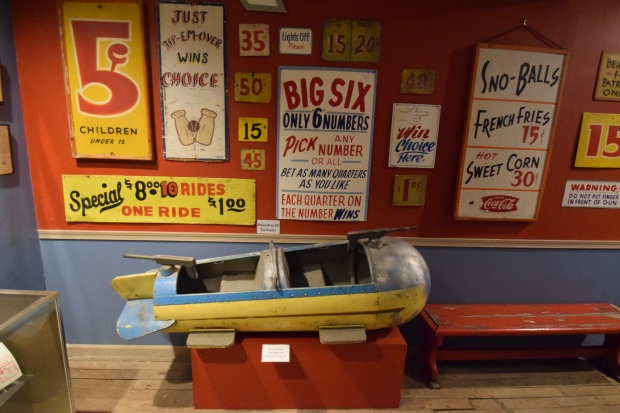 Upstairs at the Coney Island Museum (All photos by author)

The Coney Island Festival emphasizes local filmmakers and this year’s program had many works that took place in the immediate vicinity of the venue itself. Moreover, Coney Island USA integrates the screenings with the larger subculture promoted in their mission statement. That is, to extol and carry on many traditional forms of popular entertainment (as we will see in a minute). It was fitting then that the opening night film was “Going Attractions:The Definitive Story of the Movie Palace.” This documentary is an engaging and thorough look (past, present and future) at the classic American “picture palace” which, at the height of their success in the Twenties and Thirties, were among the most opulent buildings ever constructed for a clientele of the average person coming in off the street.

These theaters, many of them extraordinary in their scale and richness of architectural detail, once crowded together in the entertainment districts of major urban centers and, in a more solitary fashion, graced the main streets of medium-sized cities and even small towns. Director April Wright has steered this project, obviously a labor of love, with a sure hand. The backstory is presented clearly but not ponderously, with most commentators (from star movie critic Leonard Matlin on down) beginning with personal anecdotes of their first visits to one of these amazing venues. Of course, times change and eventually the movie palace business model declined, post-WW2. Suburbanization and the rise of TV were two big reasons and the scale of these theaters were a big problem, they required big staffs and upkeep costs proved prohibitive. 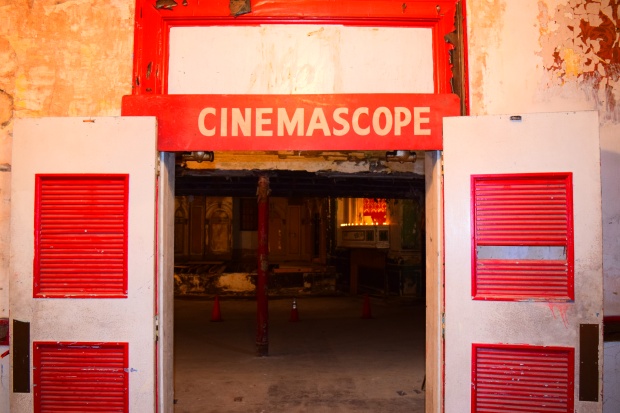 Renovation or more neglect?: The Everett Sq. Theater in Boston is one of hundreds old movie theaters in limbo.

“Going Attractions” gives significant space to those who have played major roles in saving these now-treasured buildings from neglect and maybe a date with the wrecking ball, several of these good folks can be see in the trailer. Probably the most astounding rescue tale is told by former ballerina turned activist and author Rosemary Novellino-Mearns. It is hard to imagine that Radio City Music Hall, the exquisite Art Deco landmark known for the Rockettes and its stupendously popular holiday shows, was threatened with demolition in 1978. In an inspiring David-and-Goliath story, Rosemary and her future husband started a save-Radio-City campaign with their fellow employees. They attracted publicity and powerful allies in what ended up being a major embarrassment for the Rockefellers, who had to cancel plans for a lucrative office skyscraper on the family-owned site. Novellino-Means was blackballed out of her job as a full-time dancer within a year but in the Q&A afterward unsurprisingly told us she had no regrets. 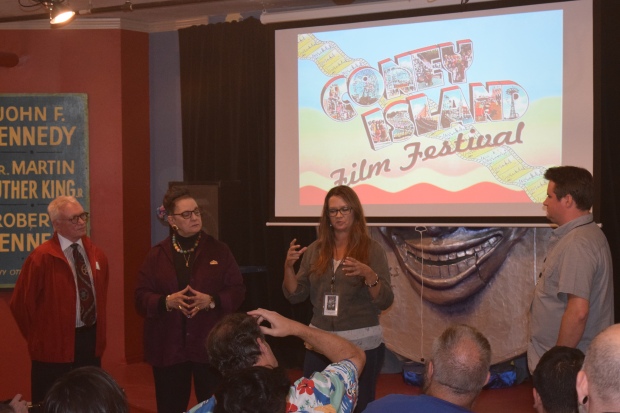 Rosemary Novellino-Mearns, second from left, standing next to director April Wright after the screening of “Going Attractions.” 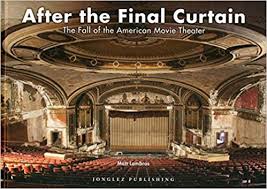 Another featured commentator for “Going Attractions” is photographer Matt Lambros. His book “After the Final Curtain: The Fall of the American Movie Theater” is a must-have for anybody with an abiding interest in this subject. Lambros has criss-crossed the country photographing the current, usually abandoned, state of these magnificent venues. Their beauty is typically still evident despite years of neglect, via Lambros’ vivid large-format photography. A new volume of “After the Final Curtain” is due out this fall. See his website for more details: https://afterthefinalcurtain.net/books/

Radio City Music Hall had been known for their elaborate dance numbers performed on its enormous stage before the movie. This inter-disciplinary spirit continues in film palaces that were saved (which often double as performing-arts centers) and was also on display at this festival. Vaudeville acts were also popular attractions at the old movie palaces and Coney Island USA has for years fostered this spirit. They put on the crowd-favorite Mermaid Parade on Surf Ave. every June and stage many sideshow-type events, including at the opening night party. For a reasonable fee, you got an open bar (topped by almost topless dancers) a generous buffet and a real live revivalist show, featuring an MC who doubled as a cigarette-swallower, a contortionist, and a few burlesque dancers before I was obliged to catch the Q train back to my Manhattan hotel. 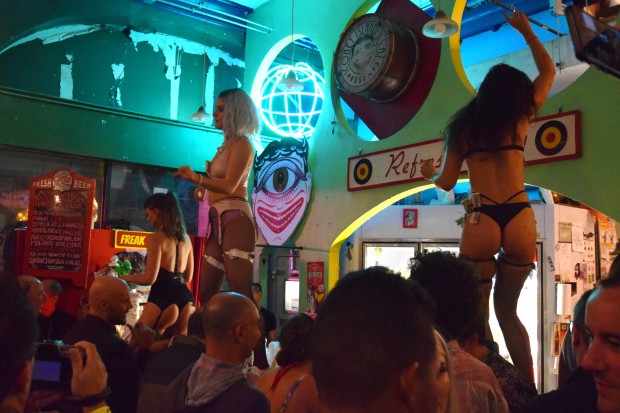 I had to head back to Boston on Sunday that weekend so I couldn’t catch the block of animation shorts. The festival’s local flavor continued here with this half-minute clip of the delightful-looking “Brooklyn Breeze” 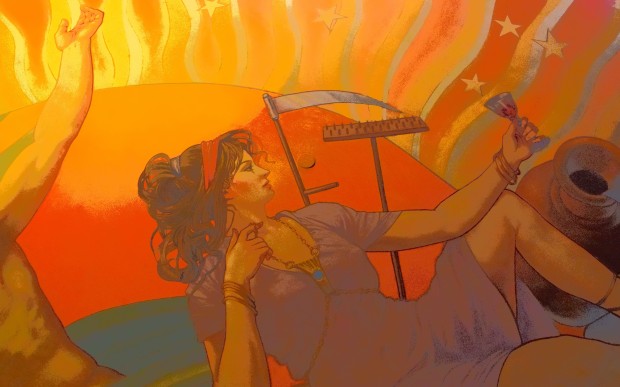 Across the street I hit the jackpot at the AMC Empire. Over the voluminous lobby of a multiplex, where escalators zipped you up to the latest blockbuster, was a gorgeous old-time dome where Egyptian and classical Greek themes intermingled. People don’t know what they have, it was only after some of them noticed me pointing my Nikon up at the ceiling that they looked themselves. Baby steps. I found out later that the original Empire Theater was located a little further up the street and that the entire cinema was moved 170 feet to its present location, with giant balloon figures of Abbott and Costello made to look like they were tugging it along (the duo performed at the old Empire). The the main part of the theater was pushed up towards the street to be the lobby while the modern multiple screens were built behind. Hey, whatever it takes! I love American ingenuity and American movie palaces. Find out where there is one close to you and support them, keep the tradition alive.
—Rick Ouellette 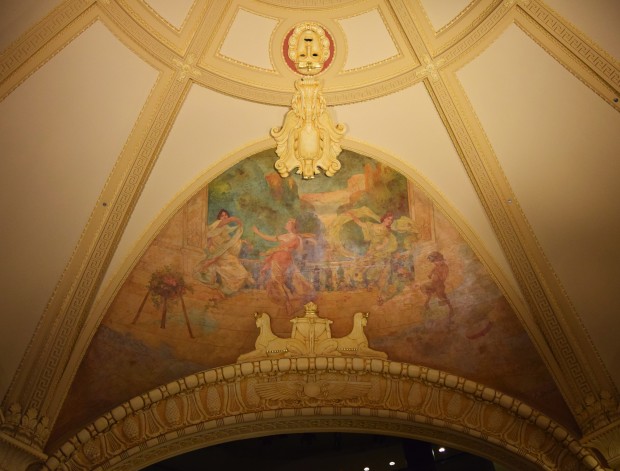 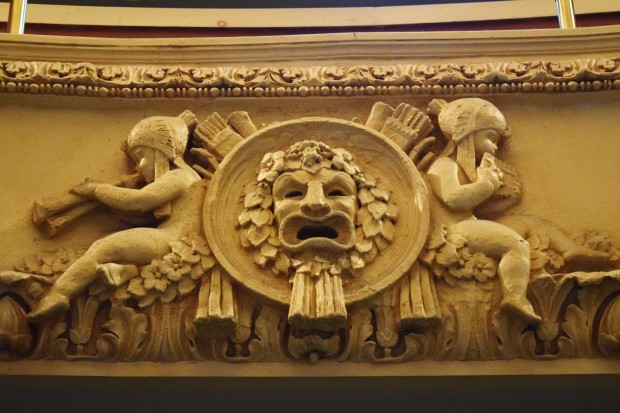