(Somehow, the first two installments of my Dubious Documentaries series got lost in the shuffle, so I’m re-posting them here in shortened form so they’ll be archived. The last two installments coming in early January. Happy New Year!)

“Chariots of the Gods” (1970)
The unvetted premise of Erich von Daniken’s 1968 bestseller “Chariots of the Gods?” is that alien astronauts visited earth in its antiquity, influencing advances in civilization and supplying the technology that allowed for the building of the Egyptian pyramids, the Easter Island statues and just about everything short of the Brooklyn Bridge. As in the book, the film’s free-associating conclusions range from intriguing-but-unlikely to plain preposterous and matters are not helped by the old school “authoritative” narrator. But we all like ancient mysteries and this movie is very entertaining in an eye-rolling sort of way. “Chariots of the Gods” was even nominated for a documentary Oscar, helped no doubt by Ernst Wild’s globetrotting cinematography and the beguiling musical score by the Peter Thomas Sound Orchestra. 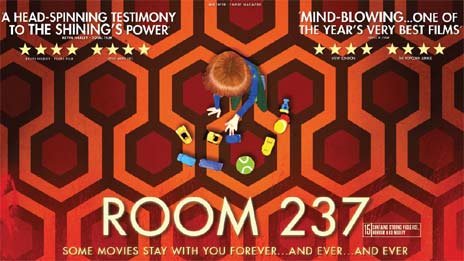 “Room 237” (2012)
If there were a quantifiable way of giving an award to the documentary with the most bats in the belfry, “Room 237” would be a strong contender.
This film is a coming-out party for the subculture of conspiracy geeks who think that Stanley Kubrick’s 1980 chiller “The Shining” is a whole lot more than just the master director’s entry in the horror genre. According to the six heard-but-not-seen interviewees featured here, “The Shining” is one or more of the following things:

A) The veiled confession of a man who feels remorse for helping fake the Apollo 11 moon landing in 1969.
B) An encyclopedic film essay about sexual repression
C) A coded allegory of the Nazi holocaust
D) A connect-the-dots method of decrying the violent disenfranchisement of Native Americans

Not all of these theories are over the top. Aspects of “B” and “D” have been discussed by mainstream scholars and critics for years (Oedipal themes bob to the surface and the Overlook Hotel is clearly said to have been built over a tribal burial ground) and Kubrick spent years trying to produce a Holocaust-themed film. But it’s item “A” that’s bound to stick in the craw of those viewers like me who, while recognizing “Room 237” as an enjoyable evening out at the local arthouse, want to land back in the real world by the closing credits. To use “Where’s Waldo” methodology to claim that Kubrick was somehow recruited by NASA to film the moon landing on a soundstage is just silly—I don’t think Neil Armstrong will bother turning in his grave over this one. The five-minute excerpt below shows just how quickly fascination alternates with irritation while listening to theories that seem to say more about OCD than about the possible existence of clandestine reality.