The rock and roll package tour, or travelling music festival, has a long history. They started in the Fifties and continued with such events as the 1970 Festival Express, Bob Dylan’s Rolling Thunder Revue and later summer-shed happenings like Lollapalooza and the Lilith Fair. Here in New England, we are being treated to a regional version of this called the Whistlestop Rock Fest. It began with a bravura 8-hour show in January at the Askew club in Providence. It continues of Feb. 29th at the ONCE ballroom in Somerville, Mass. and there are several other dates upcoming. See whistlestoprock.com for full info on show dates. 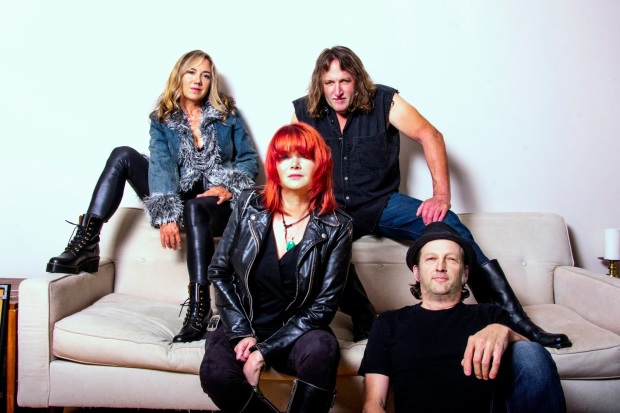 Justine and the Unclean

“The Little Festival that Could” began with a casual online chat last year between Justine Covault (of Boston alt-rock favorites Justine and the Unclean) and Simone Berk, who fronts the power-pop quartet Kid Gulliver. The idea of getting all their friends’ bands together for a big show “caught fire” (as Covault said in a recent Providence Journal article) and soon the dialogue extended to several other woman musicians in the area. The rock music scene in my neck of the woods has long been known for its camaraderie, so it’s little surprise that, as Berk said in the same piece, “Next thing you know, we knew we had to do it.” 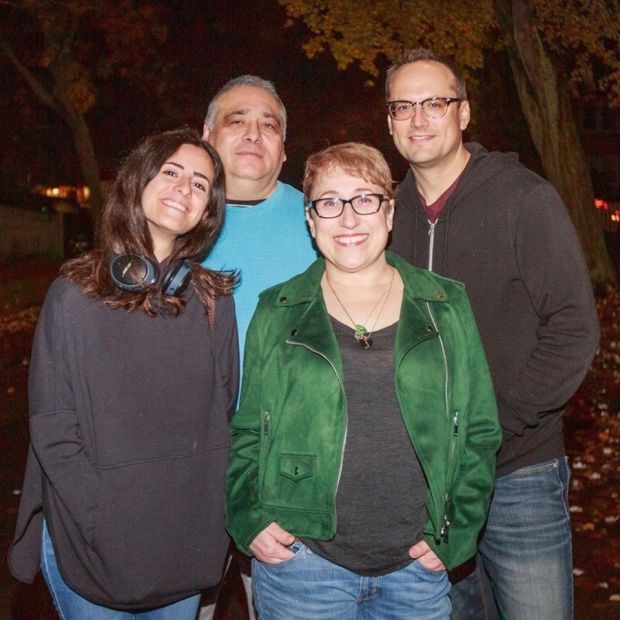 What resulted, after much legwork by all involved, was a curated festival that involves up to nine bands. All are co-ed or all-women groups and guest spots are promised at each gig. At the Providence show, it was clear just how well this concept was planned, with its quick succession of 45-minute sets. With so many groups, there was practically a built-in audience, supplemented by fans and friends coming down from the Boston area and a local Rhodey contingent lured by hometown faves Heather Rose in Clover and the promise of an all-star jam of other Providence rockers. HRIC would be be for me the revelation of the night, showing Whistlestop’s underlying value: turning local favorites into regional ones. But more on them later.

Views from Askew. From top to bottom: Heather Rose in Clover, Chelsea Curve, the Knock-ups. (Photos by author) 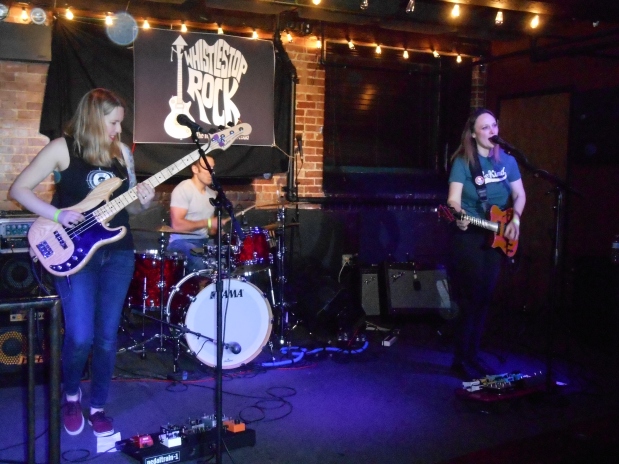 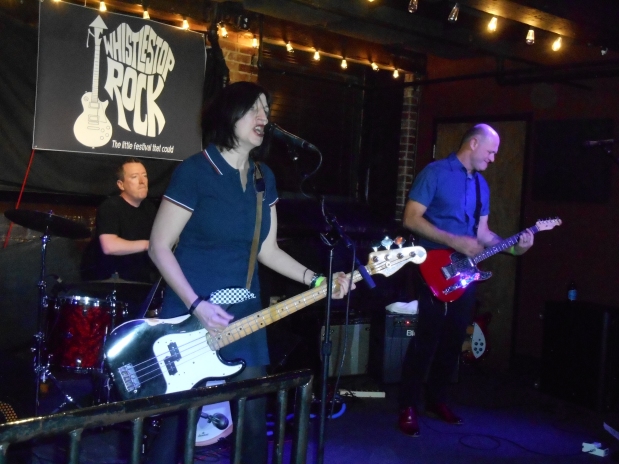 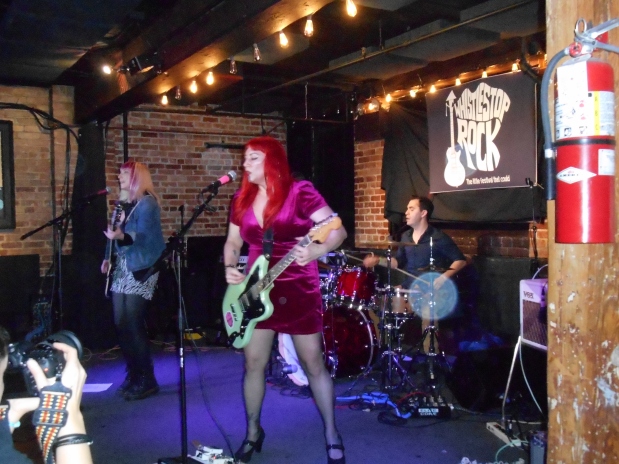 When I first ambled into Askew a little after 4:00 PM, Field Day was near the start of their set. Like many of the other groups on the bill, they played pretty straight-ahead rock with a fierce self-actualization. According to their own bio, Field Days’ members found themselves formed “unexpectedly, when its members were well into middle age.” This is not so unusual nowadays esp. when members have backlogs of material waiting to be heard. The band is led by former Boston Globe music critic Joan Anderman and fellow Globie Dan Zedek, a veteran of several area bands. The song “Finished With You” shows they were more than ready to hit the ground running.

Cold Expectations play in a more rootsy, country-rock style that builds on the genre’s early 70s heyday as well as later practitioners like Green on Red. Singer-songwriter-acoustic guitarist Steve Prygoda, bassist/back-up vox JoEllen Saunders, drummer Nancy Delaney and lead guitarist Bob Metzger have made a fine craft out of thoughtful, fully-arranged numbers like “Aliza Don’t Care.” I’ve known Prygorda for some time and way back when I did some videos for an earlier, more hardcore outfit. Those other roots were also apparent as the Expectations finished with the Camper van Beethoven barn-burner “Take the Skinheads Bowling,” which has become a bit of a regular finale with them.

Steve later told me of his love-hate relationship with cover versions. That’s understandable for any band that works hard to get their own material heard but is also an ice-breaker for people getting to know you. Most bands struck the balance of mixing in one or two classic-rock standards. The Knock-ups are one of the more high-profile bands playing the Whistletop, along with Justine and the Unclean and Maine’s garagecore stars Tiger Bomb, who were unable to play this first date. (Tiger Bomber and co-organizer Lynda Mandolyn was there and made a cowbell cameo during the Unclean’s later set). The brassy Knock-ups are first-rate practitioners of the kind of bristling rock attack that’s been a big part of the Boston scene since the glory days of the late, lamented Rat punk club (see related post). Singer-guitarist Gretchen Shae (who was invited up onstage to play a song with U2 a few years back) delivered several thrashers from the group’s growing catalogue and threw in a good cover as well (“Ring of Fire”). Bassist Cat Verlico confirmed the band’s knack for cagey humor, singing “I Hate Your Facial Hair.” That number was met with approval from your clean-shaven correspondent.

Kid Gulliver were maybe a little less snazzy (except for Simone Berk’s glittery shoes!) but confident material like “You’ll Never Know” and “Suzie Survived Chemotherapy” were a fantastic blend of Blondie/X era and riot grrl. This natural alchemy of styles from Nuggets-era garage to 90s grunge inform a lot of indie-rock nowadays, as was evident from the closing act Powerslut, who unfortunately are doing their farewell show at the next stop of the tour on Feb. 29th (at the ONCE ballroom in Somerville, MA).

Back on the subject of cover versions, Kid Gulliver do a great take on the old 10cc hit “I’m Not in Love.”

But most bands have their own little spin on it, like Chelsea Curve with their Mod influence (their cover was an awesome take on the Jam’s “In the City”). The irrepressible singer/bassist Linda Pardee, along with guitarist Tim Gillis and drummer Ron Belanger excel both in the more classic melodic punk style of “Don’t look Down” and in their more quirky material like the ditty they wrote explaining how to decode the weather beacon atop the old John Hancock building in Boston.

Heather Rose in Clover were up next. Singer/guitarist Heather Rose had been sporting a Belly t-shirt during the local all-star session. Belly (who gained some MTV notoriety in the early 90s) also hailed from the Ocean State and were led by Tanya Donnelly, who before that co-fronted Newport-based cult favorites Throwing Muses along with Kristin Hersh. HRIC have some of Muses’ adventurous spirit, their indie-rock attack colored with passages of psychedelic guitar from Rose, complemented with the bass interplay of Lisa Middleton and the deft drumming of Chris Alvarado. Their original songs are sharp and declarative, using (in their words) “the sharp end of their own broken hearts” in such fierce broadsides like “Satellites” and “Go Back to Ohio.” Better still was the barbed wit that fed a song like “Welcome to New England” (with its memorable line “I had to scrape Antartica off my windshield”). They also killed on high-profile covers of “Under Pressure” and “Psycho Killer.”

Justine and the Unclean have been plying their superlative power-pop-punk through two kick-ass albums on Rum Bar Records, Get Unclean and Heartaches and Hot Problems. When listening to these songs, you wonder to yourself (as with many of these groups) how aren’t these guys huge? In Justine Covault they have a diminutive dynamo of a singer-songwriter-focal point. Her razor-sharp lyrical wit and fiery vocals, plus the relentless instrumental momentum provided by bassist Janet Egan King, lead guitarist Charles Hansen and powerhouse drummer Jim Janota (formerly of Boston rock institutions the Bags and Upper Crust) make songs like “Rock and Roll Blackmail’, “Monosyllabic Man” and “Bring Me Fire” into forces of nature.

Click below for kick-ass rock & roll (and great video-making) from Justine and the Unclean and, below that, the unstoppable Tiger Bomb!


But it’s mostly rhetorical asking why the Unclean or Tiger Bomb, or whoever your fave local rockers are, aren’t huge in this day and age. We all know what rules the pop-music roost on a national and global stage: you can see it each week on “Saturday Night Live” when the latest Instagram pop act trundle thru another redundant set piece that is 90% choreography and 10% bad music. Rock may have lost its pop-culture supremacy to hip-hop and the latest American Idol-style sensation but you would hardly know it here. The sisterly solidarity, hard work and self-supporting vibe is admirable, esp. considering the day jobs and the odd kid to raise. Hopefully, the Whistlestop Rock concept can continue and even expand on this current model. What’s most impressive is the skill and all-out energy of these bands, with members ranging from roughly their mid-20s to mid-60s, rocking out and writing songs in group collaborations that blessedly cuts against the grain of today’s empty ideas of viral “success.” This is the real deal, so catch it while you can: this here rock & roll train is bound for glory.
(Again, stop by the Whistlestop Rock Facebook group or whistlestoprock.com for full details)
—Rick Ouellette