It’s hard not to enjoy an earnest indie doc about aspirational Americans and I would be hard pressed to find anything objectionable on the surface of 1997’s “Hands on a Hard Body.” This film about an East Texas endurance contest, in which the last person standing with one hand on a Nissan pickup truck wins the vehicle, won an audience award at the L.A. Film Festival the year it came out and was later made into a musical co-written by Trey Anatasio. That play eventually made it onto Broadway for a month and garnered three Tony nominations.

I had long been interested in this cult film, whose scant availability on home video kept it from inclusion in my reference book “Documentary 101.” I recently chanced upon a DVD of it for a dollar at a library book sale, making me glad I was far too sensible to ever shell out they $84 they were asking on Amazon. I must admit to a bit of an inner smirk when I saw the printed legend on the box that read “You lose the contest when you lose your mind,” presumably a quote from one of the competitors. My initial reaction to an event I would consider inherently demeaning would be more like “You lose your mind when you enter the contest.” Below that quote, critic Todd McCarthy enthused “A classic piece of Americana… produces gales of laughter.” While I don’t remember laughing once, I did come away from the film with much respect for the contestants while still bemoaning the chronic fragility of an American economic system that would make such a contest viable.

Movie fans of a certain age may well recall Sydney Pollack’s 1969 feature “The Shoot Horses, Don’t They?” based on the 1935 novel by Horace McCoy. It depicts a particularly humiliating Depression-era dance marathon as dramatized by McCoy, who had worked as a bouncer at such events. Flash forward six decades later and while there may not be a widespread depression, there are still people who will go to great lengths either to win badly-needed money or a commodity they could otherwise not afford. Gone are the up-front exploitations of the callous marathon MC played by Gig Young in “They Shoot Horses.” In fact, the folks at the Jack Long Nissan dealership in Longview, Texas couldn’t be any nicer and the co-sponsoring radio station plays it up as a wholesome community event.

And it gives every indication of being so. The contestants don’t feel they are being played and it would be an ungenerous viewer who would begrudge them for being there. It’s easy for me to be all high-minded and say to myself that I would rather walk to work for the next hundred years than to be there. But many for the 22 people lined up around the pickup at the start, this here is for real. Not having to make payments on a vehicle can mean the difference of not having to get a second job or whether or not you can afford night classes. Moreover, in workaday East Texas, “cars don’t make money, trucks make money” a worthy observation that is fleshed out in the video clip from the musical at the end of the post.

So the willing participants gamely join in for a few days of sleep deprivation, boredom, back strain, mosquitoes and, eventually, contagious laughter and delirium. But through it all, they keep their spirits positive and graciously answer the questions of the filmmakers, while either at the truck or during the breaks (five minutes an hour, thirty minutes every six hours). An intrepid few keep their stamina up to last past the 75-hour mark. By this time, whoever is left has earned much respect and those who had to drop out are not bitter but have found a valuable takeaway. Paul, one of the older entrants for whom this can be particularly difficult says the contest showed him that “you don’t pay attention to who’s right beside you (in life) and that they could be your good friend.” After a recuperative sleep, he’s back the next day to support the remaining standers. 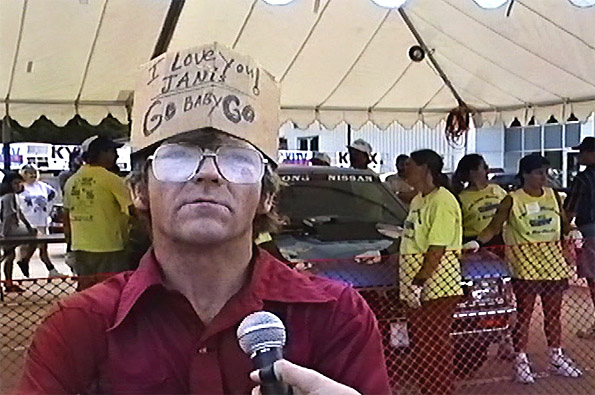 It’s too bad that this magnanimous outlook can’t extend to the greater economic and social framework, as the hardbody contest betrays a harsher reality where everyone “wants the same thing but only one can have it.” Instead, that system only seems to abide to an increasingly dumbed-down blame game full of “welfare cheats” and “one-percenters.” This is a worthy film but it doesn’t really drill down to the deeper implications at hand. Interestingly, no less a director than Robert Altman had plans to make “Hands on a Hard Body” into a feature film before his death in 2006. With his great skill at ensemble casts and keen sense of American discontents, that would have been a highly interesting project. Instead we are left with a likable document and an appreciation of its persevering subjects. I still wouldn’t enter the contest, though.